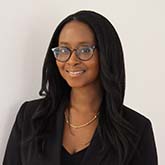 Fatoumata Diallo is a Project Manager and Research Fellow at ISDP’s China Center. She previously worked at the EU delegation to China in Beijing. Ms. Diallo holds degrees in International Conflict studies from Leiden University (Leiden, the Netherlands) ; and in International Relations and Chinese Studies from the INALCO (Paris, France). She also studied Chinese language at Beijing Language and Culture University (BLCU). Her research focuses include Chinese domestic politics and governance, China-EU relations, China’s defense and security policies and China’s political economy.