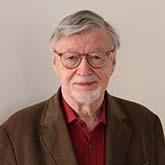 Head of the Stockholm China Center

Lodén’s main research interests are in the broad field of Chinese intellectual history, and he has published several books and numerous articles on different aspects of Chinese culture, both pre-modern and modern.

His main current project is to publish complete and annotated translations into Swedish of the Confucian Four Books and a history of Chinese thought in Swedish, from the earliest times to the present. Together with Dr Wan Xinzheng he is also working on a grammar of Chinese in Swedish.