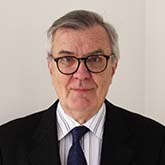 Distinguished Fellow and Head of the Stockholm Japan Center

Dr. Lars Vargö is the former Swedish Ambassador to Japan (2011-14) and South Korea (2006-11). He holds a Ph.D. in Japanese studies (history) from the University of Stockholm (1982). He graduated from Uppsala University 1972 with a major in sinology. In 1972-76 he was a repeat Mombusho scholar at Kyoto University. As a diplomat, Vargö has returned to Japan four times, but has also served in Libya, Lithuania and the United States. During 2001-2005 he served as an Ambassador and the Head of the International Department of the Swedish Parliament.

Vargö has published a number of books on Japan in Swedish, mainly in the fields of history and literature, but is also the author of numerous articles in Swedish, English and Japanese. He has translated Japanese novels, short stories and poetry into Swedish. He is the founder of the Seoul Literary Society, as well as the Tokyo International Literary Society

Vargö has been decorated with the “Grand Cordon of the Order of the Rising Sun” (2014), the “Kwanghwa Medal Order of Diplomatic Service” (2011) and the “Korean Red Cross Grand Taegug Award” (2007).