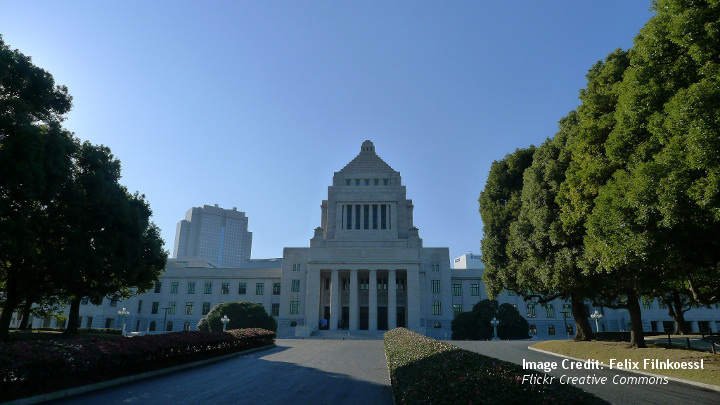 The constitution of Japan, which has lasted longer than any other constitution in the world without amendment or revision, has gained fame as the “pacifist constitution”. This is due to the constitution’s Article 9 and its vow to “renounce war as the sovereign right of the nation”. The full text of the article reads as follows:

Aspiring sincerely to an international peace based on justice and order, the Japanese people forever renounce war as a sovereign right of the nation and the threat or use of force as means of settling international disputes. In order to accomplish the aim of the preceding paragraph, land, sea, and air forces, as well as other war potential, will never be maintained. The right of belligerency of the state will not be recognized.

In Japan’s post-war history, Article 9 has been variously interpreted by successive administrations. Given the current security environment in East Asia, with escalating tensions on the Korean peninsula and a rising China asserting itself in a bolder way than before, the debate over how Article 9 should be understood and whether it should be amended has heated up. Indeed, reform of Japan’s constitution, and particularly Article 9, has been an issue which Prime Minister Shinzo Abe has long pursued.

On November 17, 2017, Abe delivered his keynote policy speech at the 195th session of the Japanese Diet (Parliament). In it, he stated that “the security environment now surrounding Japan is the most severe in post-war history”. In additon, he expressed his “firm conviction that…discussions on constitutional reform will be able to move forward”. However, any deliberations of amendment have been called into question following allegations of corruption made towards Abe and his family. Major events taking place in Japan through 2019 and 2020 further casts doubt over Abe’s proposal to have the amendment process finalized in 2020.

The origins of Japan’s modern constitution and specifically Article 9, is a subject of much debate within the country. Given that the constitution was written and promulgated during the American Occupation period, some prefer to see Article 9 as a foreign “imposition”. Others argue that, shocked by the destruction of the war, it emanated from Japanese leaders themselves, intent on preventing the repetition of such events.

A constant source of friction between Japan and the U.S. has been the issue of Japan’s willingness and ability to partake in “collective self-defense”; the doctrine of protecting an ally in the event of an attack. However, the most recent reinterpretation in 2014, marked a historic shift in Japanese foreign and defense policy, formally allowing it to engage in collective self-defense for the first time.

In the years since 1947, Japan has incrementally increased the scope of activity allowed for the SDF, each time igniting debate and legal disputes over where the boundaries of the SDF’s activities lie. As yet, Japan does not possess what are considered to be “offensive” missiles. Prime Minister Abe has stated that any further expansion of Japan’s military role would require a constitutional revision. According to Abe, a revision of Article 9 is also necessary to abate concerns about the SDF’s status as constitutional and legitimate.

Position of the Parties

Power and Positions of the Major Parties

It is important to note that due to the faction system, there are a wide array of attitudes toward constitutional revision even within the parties. The lack of party discipline has, for example, seen the formation of cleavages within Kibo no To that threaten the continued existence of the party. Warring factions within the DP over constitutional revision resulted in some of its faction leaving the party and forming the CPJ.

Even within the LDP, there are voices calling for the complete removal of Article 9 while others prefer it to be revised to include an explicit referral to the SDF.

The remaining representations in the Diet are relatively insignificant in number. They are either made up of small and more regional parties, or are formed after splitting with other parties. Due to the nature of Japanese politics, parties often form and then collapse or fragment into various parties. Although the Japanese Communist Party occupies relatively few seats, it was worthy of mention here because it is one of Japan’s oldest continuous political parties.

With the current power of the LDP, Prime Minister Abe has potentially enough votes to push through a proposal to a national referendum as the majority of the Diet supports constitutional change to some degree. The LDP will need the support of its ally, Komeito, which is more cautious on the amendment issue. The Kibo no To Party supports revision in principle, but not necessarily under an Abe Premiership. The Constitutional Democratic Party, Democratic Party, and the Japanese Communist Party on the other hand, are against revising the constitution, but do not have enough votes in either houses of the Diet to block a proposal on their own.

What Would a Revised Article 9 Do?

The precise form that a constitutional amendment would take is still a matter open for debate. When Shinzo Abe returned to power in 2012, the LDP released a draft constitution which eliminated the portion of Article 9 disavowing “war potential” and changed Article 96 so that only a simple majority (instead of two-thirds) approval would be necessary in the Diet before passing off a proposal to be ratified in a national referendum. However, this draft was withdrawn.

In May, 2017 during a speech made on the 70th anniversary of the enforcement of Japan’s constitution, Abe stated; “We need to make sure, at least within our generation that the argument that ‘the SDF may be unconstitutional’ will no longer be made.” This indicated what an amended Article 9 may look like. It now appears that such an amendment would define the role of the SDF as to resolve legal disputes over the limits of its activity, specifying where and when it may be deployed. Abe originally hoped to revise the constitution by the time of the 2020 Olympics in Japan, so as to mark a new era for the country.

In recent years, support for altering the constitution has steadily risen, and some polls have estimated that the Japanese populace is divided roughly around 50-50 in favor of and against changing the constitution. However, according to the most recent poll taken in December, 2017, 54.8 percent of respondents opposed revision of the constitution under Abe, whereas 33 percent backed it. Abe faces a major dilemma over whether to attempt to push through a constitutional revision this year. A failure in a national referendum would no doubt be a devastating loss for the Prime Minister. Furthermore, with the time it takes to draft and propose a constitution, and then organize a national referendum, meeting this goal in 2018 may be difficult. A referendum would have to occur by December 2018, in order for an amendment to go into law by 2020.

Various international factors have contributed to the rise in support of amending the constitution. Growing concerns over North Korea’s nuclear capabilities reached a peak in autumn of 2017 following a series of North Korean missile launches over Northern Japan that fell into Japan’s Economic Zone. In addition, an increasingly militarizing China is working to assert its presence in East Asia, including their claims to the disputed islands in the East China Sea.This combined with the unpredictability of the Trump administration, and the possible escalation of a polarizing trade war have accelerated calls within Japan for the country to take on a greater role in its own defense.

Among those in favor of constitutional revision, 66 percent of the Japanese population cited the “changing security environment surrounding the country” as their justification. An additional 20 percent thought that a change is needed in order to correct a constitutional contradiction, 10 percent thought a revision is needed to enable more international activities for Japan, and 3 percent believed it would strengthen the alliance with the U.S.
However, recent allegations over cronyism and corruption has embroiled President Abe and called into question a national referendum. As Abe’s popularity has fallen, some speculate that he will have a difficulty in ensuring his reelection as the leader of the LDP in September 2018. Should Abe disappear from his post, it is uncertain if another leader would initiate a referendum.

Whichever position one takes on the issue of constitutional revision, an amendment to Article 9 would no doubt have great implications for regional security. Perhaps most importantly, it would almost certainly ignite protest amongst the country’s neighbors due to the historical association of Japanese imperialism and wartime aggression. From the perspective of China and the Koreas, this has been followed by a post-war period colored by textbook controversies over disputed histories and visits by Japanese officials to the Yasukuni Shrine, where many of Japan’s wartime leaders are buried.

Furthermore, persisting territorial disputes between the East Asian countries pose major obstacles to the improvement of relations. North Korea, South Korea and China consider Japan’s claims to the disputed islands as illegitimate, as they stem from the period of Japanese imperial expansion. The wide perception in China and the Koreas that Japan lacks remorse for its imperialism is the background against which any change related to the Japanese military will be understood. Despite the Japanese populace’s strong support of pacifism, emotions related with the war run very high in the region. An amendment to Article 9, if not done with sufficient tact, could increase regional tensions, and cause more harm than good to Japan’s security situation.

The coming years no doubt hold much for Japan’s role in the region and the international stage. With a rapidly changing situation in East and Southeast Asia, Japan’s presence in diplomatic, economic, and potentially military spheres may well see dramatic changes.