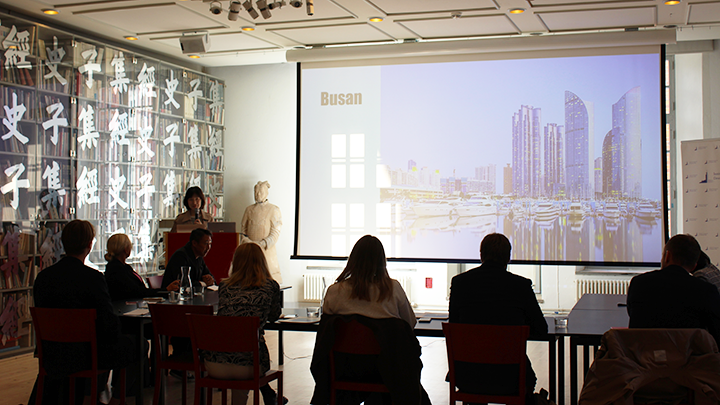 Last week, September 5-8, 2022, the ISDP Stockholm Korea Center welcomed the six Nordic journalists back to Stockholm for the third in-depth session on South Korea as part of the ISDP-KF Nordic Journalist Fellowship Program. The Fellows participated in several lectures during the week to expand on their first-hand experiences of various aspects of contemporary Korean society from their previous visit to Seoul in June. To promote greater awareness and more balanced knowledge of Korea, the Korea Foundation and the ISDP Stockholm Korea Center launched the Nordic Journalist Fellowship Program in May this year. Six journalists from Sweden, Denmark, and Finland were invited to the initial training session in Stockholm, where they attended lectures and learned about South Korea’s history, culture, and political situation. This was followed by a trip to Seoul in June, which included four days of meetings, visits, and tours to relevant sites, as well as time for the journalists to conduct independent interviews and meetings. Last week, the journalists returned to Stockholm for a final session to engage in more in-depth lectures on the Korean Peninsula. The final training session commenced with a roundtable discussion reflecting on the learnings of their previous trip to Seoul. The ten lectures during the last session of the Fellowship Program covered topics including South Korea’s economic and business growth, current trends and issues in South Korean society, and South Korean foreign policy. Experts from several prestigious universities and other institutions across the world were invited to lecture and discuss the challenges and advancements facing modern Korea.

The rapid rise of South Korea into one of the most potent middle powers in the world and its unique position in Asia as one of the leading proponents of democratic ideals, economic development, and technology were major topics of discussion this week. Similarly, the emergence of the Korean wave, which includes K-entertainment (pop, drama, cinema), language, and cuisine, as well as its role in swiftly elevating South Korea to a position of prominence around the world, was addressed in several lectures. In addition, the seminars covered a number of pressing internal concerns, such as the need to advance socioeconomic equality, manage the aging population, and promote gender equality. With this third session in Stockholm, the ISDP-KF Nordic Journalist Fellowship Program for 2022 has come to an end and hopefully, we will continue this program next year. Our goal of this program is to provide a long-term platform for experts, researchers and journalists from South Korea and Nordic countries. The ISDP Korea Center would like to extend its gratitude to everyone who participated in the program and contributed to making it an interesting and educational occasion. Finally, the ISDP Korea Center is sincerely appreciative of the Korea Foundation’s partnership, which made this great initiative possible.

Here you can read the report of the first session in Stockholm and the trip to Seoul in June.