Religion and the Secular State in Turkmenistan 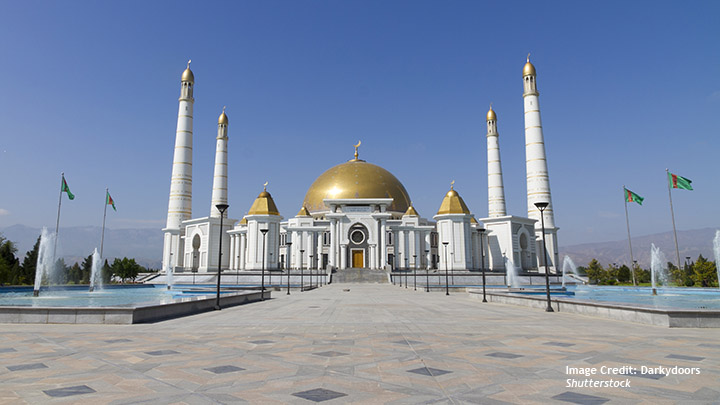 Since gaining its independence from the Soviet Union in 1991, Turkmenistan has seen an increased presence of religion in everyday life. Islam has been a continuous cornerstone of Turkmen identity for centuries and is even more so in the post-Soviet period. Turkmeniçilik (Turkmen identity) and Musulmançilik (Muslim identity) are correlated.

Similar to what is found in several Central Asian countries, Turkmenistan distinguishes between traditional and non-traditional religious practices. In Turkmenistan, the state actively privileges a form of traditional Islam. That is, the leadership mobilizes the faith in its construction of a post-Soviet, national Turkmen identity. Yet, Turkmenistan is an officially secular country with constitutional provisions for the separation of state from religion. What does this mean for religious practice in that Muslim-majority country? What is the role of the state in mobilizing religious practices even as it curtails others? And why are there so few external influences on worship in Turkmenistan?

Turkmen were historically a nomadic people that began to adopt Islam as they migrated westward in the 9th and 10th centuries. Yet Islam is a religion that has tended to flourish in urbanized societies that could establish formal institutions like mosques and madrasas. Turkmen created intensive and rich religious practices, but those were often mixed with pre-Islamic practices or honed to suit the nomadic lifestyle. Nevertheless, this did not diminish the importance of religion in Turkmen culture and Islam came to be a key marker of Turkmen identity.

Today, that culture, including Islam as a key facet, contributes to the Turkmen national identity. The state encourages the conceptualization of “Turkmen Islam,” or worship infused with veneration of elders and saints, life-cycle rituals, and Sufi practices. Yet, it discourages external influences in most spheres of life, resulting in a limited foreign religious presence. The Constitution’s claims to uphold a secular system in which religious and state institutions are separate. Nevertheless, examples of state interference in religious matters abound.

While Turkmenistan’s initial years of independence saw an increase in religious practices and the development of institutions like the Muftiate and the building of mosques, today it is more regulated. Still, the government leadership uses Islam to legitimize its role by sponsoring holiday celebrations such as iftar dinners during Ramadan or presidential pilgrimage to Mecca, Saudi Arabia. This sponsorship has validated the country’s two presidents (Nyýazow and Berdimuhamedow) as pious Turkmen, giving them an aura of cultural authority. In these ways, the government promotes a singular form of “Turkmen Islam” that is tightly bound to national identity and makes use of religious symbols to reinforce the concept of the nation-state.

In light of this, this study aims to shed light on the relationship between state, religion, and society in Turkmenistan, highlighting the model of secular governance the state observes even as it embraces Islam as part of national identity project.