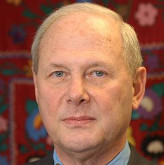 S. Frederick Starr is the Chairman of the Central Asia-Caucasus Institute and Silk Road Studies Program. He is a Distinguished Fellow for Eurasia at the American Foreign Policy Council. His research, which has resulted in twenty books and 200 published articles, focuses on the rise of pluralistic and voluntary elements in modern societies, the interplay between foreign and domestic policy, and the relation of politics and culture.

Among Starr’s most important works are Red and Hot: The Fate of Jazz in the Soviet Union (1983); Southern Comfort: The Garden District of New Orleans, 1800-1900 (1989 and 1998); Legacy of History in Russia and the New States of Eurasia (1994, Editor); Strategic Assessment of Central Eurasia (co-author, 2001); Xinjiang: China ‘s Muslim Borderland (2004, Editor). He is a frequent commentator on the affairs of the region, and the author of numerous articles in journals including Foreign Affairs, The National Review, Far East Economic Review, and op-eds in various leading American and international newspapers including the New York Times, Wall Street Journal, Washington Post, International Herald Tribune, Christian Science Monitor, Los Angeles Times, and others. Starr holds a Ph.D. in History from Princeton University, an MA from King’s College, Cambridge University, and a BA from Yale University. He is also the holder of honorary degrees from Middlebury College, Olivet College, Marietta College, and Loyola University. He is a member of the American Academy of Arts and Sciences, the Council on Foreign Relations, and the Tri-Lateral Commission.

At the side of his position at the Center, Dr. Starr is also the Rector Pro Tem of the University of Central Asia, and a Trustee of the Eurasia Foundation. Prior to Founding the Central Asia-Caucasus Institute, Dr. Starr served as the founding Director of the Kenna Institute for Advanced Russian Studies 1974-79; as the Vice-President for Academic Affairs at Tulane University in 1979-1982; as a Scholar-in-Residence of the Historical New Orleans Foundation in 1982-83. He was appointed President of Oberlin College in 1983, a position he held for eleven years. In 1994-96, he served as the President of the Aspen Institute. Dr. Starr served as an advisor on Soviet Affairs to President Reagan in 1985-86 and to President George H.W. Bush in 1990-92. Since 1995, he has chaired as well as served on the Historical Review Panel to advise the Director of Central Intelligence on the declassification of documents. From 1996 to 2001, he served as the Director of the Sidanko energy corporation.