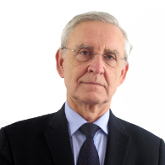 Major General Neretnieks was a Senior Fellow at ISDP between 2006-2010. Previously, he has held the position of President of the Swedish National Defence College, been a member of the board at the Swedish Defence Research Agency (FOI) and a member of the Advisory Board at the Geneva Institute for the Democratization of Armed Forces (DCAF), amongst other appointments. He is a fellow, and board member, of the Royal Swedish Academy of War Sciences. He was previously the Deputy Chairman of the ISDP Board.