Summary of the ISDP forum EU-China Relations – 2020 and Beyond 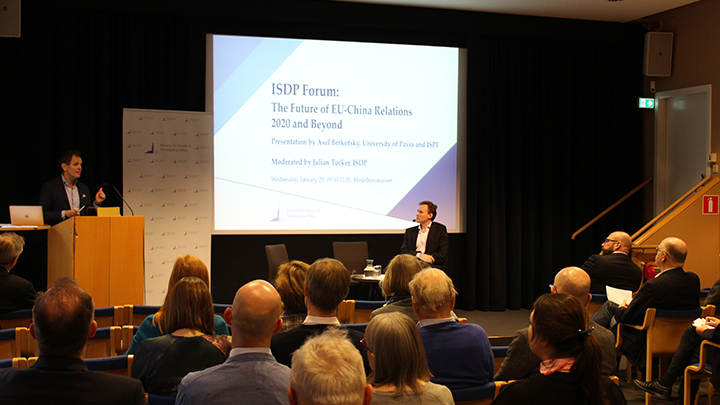 On January 29, ISDP held a public forum on the future of EU-China relations with a presentation by Dr. Axel Berkofsky of the University of Pavia and the Italian Institute for International Political Studies. The forum was moderated by Julian Tucker, Research Fellow at ISDP.

In his presentation, Dr. Berkofsky discussed the history of EU-China relations and how the terminology coming from Brussels has shifted from China being considered as a “Strategic Partner” in 2003 to a “Systemic Rival” in 2019. Dr. Berkofsky’s underlying point was that this latest categorization by the EU should have happened a long time ago as the bloc of European nations shares so little in common with autocratic state of China.

Dr. Berkofsky made the argument that back when the EU and China were strategic partners from 2003 onwards, there were a lot of attempts to cooperate on a number of different issues from maritime security, regional-security, trade etc. However, it was difficult to establish any meaningful collaboration as the EU has chosen against lifting its weapons embargo on China and refused to recognise it as a market economy, a measure which Beijing were continually pushing for. Despite the fact that the decision of the EU not to recognise China as a market economy fits with the stance of the WTO

However, over the years there has still been a very active exchange between Chinese and European officials. Dr. Berkofsky spoke about how when it came to such exchanges in the early years of the “Strategic Partner” relationship, many of the European scholars told the Chinese what they wanted to hear. A lot of scholars left their academic integrity behind and were far less critical than they should have been. There were also attempts made by Chinese institutions to put pressure on European scholars and decision-makers to encourage thinking that stopped Europe treating China as a second-class partner.

Today the situation is a little bit different. There are fewer scholars permitting any type of preferential treatment or pressure to write content that fits with the narrative from Beijing. That being said, there are a number of European and American scholars who are still writing for such publications as the Global Times, putting their names to articles which defend the Chinese position.

However, Dr. Berkofsky believes this is only part of the problem. The pressure from Beijing on Chinese scholars working for academic think tanks, policy institutes in immense. Previously there was a discourse where the researchers of an academic think did not speak on behalf of the government, they acted like scholars and gave critical thinking. However, today we see a situation where Chinese scholars, who under pressures from the government and universities, are obliged to stay on message. There is now much more of a concerted campaign to ensure that scholars stay on the national narrative.

This led Dr. Berkofsky to the contention that the majority of cooperation programs and meetings between the EU and China were a waste of resources that could be better spent elsewhere. This, he explained, was because Europe has nothing in common with China, neither in domestic politics nor in approaches to international affairs / security. Despite the number of senior level exchanges there has been no evidence whatsoever of China opening up to European advice on rule of law or human rights. This advice becomes quickly labelled as “interference” in Beijing’s domestic affairs.

This problem is particularly highlighted by the fact that China attempts to showcase itself as adhering to Western norms and values by using the right terminology such as “democracy” but then adding the term “with Chinese characteristics” to the end in order to defend their own unique position that they take in domestic and international affairs.

Dr. Berkofsky admitted that his opinion was quite critical, but it was necessary to recognize the fact that the EU has been trying to cooperate with a state run by an autocratic government. However, he also acknowledged that of course it is still necessary for the EU to engage with China on a number of different issues. China has now been labelled as a “Systemic Rival”, however, the country does remain a strategic partner to the EU in some areas such as climate change and reform of the WTO.

The presentation was followed by a Q&A which touched upon issues such as the 17+1, the future of EU-China relations post-Brexit, the benefits and concerns of the Belt and Road Initiative and Great Power rivalry.