Summary of the forum “Secularism in Central Asia: the case of Kazakhstan” 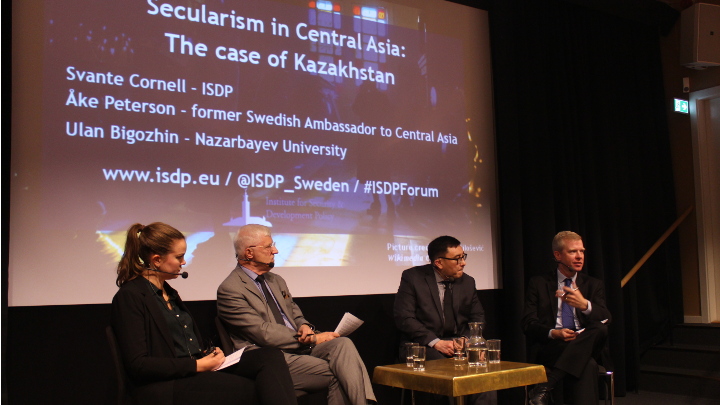 On October 23rd, 2017, ISDP hosted a forum at Medelhavsmuseet in Stockholm on the topic Secularism in in Central Asia, focusing on Kazakhstan’s model of governance.  This event was organized to promote ISDP’s new paper on the topic, to be released shortly.

Dr. Cornell introduced the topic and explained how Kazakhstan’s model of secularism was unique in its form. The panelists were asked about the recent terrorist attacks committed in the West by central Asians, and if the region was, as many media insinuate, a breeding ground for violent extremism. Amb. Peterson pointed out that perpetrators of terrorist attacks that have a Central Asian background were in fact radicalized abroad. Dr. Bigozhin then described and commented on Islam in Central Asia, focusing on Kazakhstan. He described the sect of Islam traditional to the country, as well as the globalization occurring there. The speakers were also asked to comment on restrictions on religious freedom in Kazakhstan.

The forum ended with an open Q&A session open to audience members, which covered topics such as religion in Kazakhstan, policies of the West towards Kazakhstan, and the possibility of a post-Soviet Muslim state model.

ISDP would like to thank the speakers and the audience of this forum for engaging discussion this vital topic.