Summary of the ISDP Forum: A Billion Ballots: Managing the World’s Largest Democracy 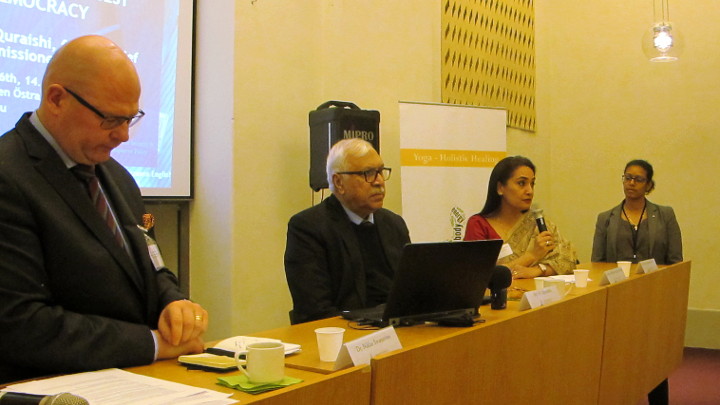 On April 27th, 2017, the Institute for Security and Development Policy in collaboration with the welcomed Dr SY Quraishi, the former Chief Election Commissioner of India, to share his understanding of the Indian electoral system.

Often called the world’s largest democracy, India constitutes the largest electorate in the world today, having conducted 16 General Elections to the Parliament and more than 400 General elections to the State Assemblies. Mr Quraishi elaborated on how India’s capacity to administer free and fair elections at such a massive scale has often surprised observers, given that there are plenty of examples of developing countries either foregoing democratic elections altogether, or having rubber stamp elections rife with electoral fraud.

The elections are conducted by the Election Commission of India, an independent and autonomous body under the command of the Chief Election Commissioner, ensuring the impartiality and legitimacy of the elections. As the former Chief Election Commissioner, Mr Quraishi highlighted the importance of both the electoral laws and the functioning of the Election Commission in ensuring that the electoral system is not only inclusive in terms of special provisions for minorities, the disabled and the illiterate, but also expansive with respect to the geographical scope, reaching the most remote areas of the country. He also brought up one of the most interesting aspects of the Indian election – the wide use of Electronic Voting Machines (EVMs), which has continued to increase since its inception and has served as a mechanism to tackle electoral fraud and miscounting.

Despite these significant strides, Mr Quraishi also elucidated on the existence of certain vulnerabilities such as paid news, lack of transparency in campaign financing and the ineffectiveness of the First Past the Post (FPP) system remain issues that need resolving. With the addition of 149 million voters between the ages of 18-25, the influence of social media in securing votes and the potential for its misuse has also been brought to the front. Nevertheless, the existence of these shortcomings does not undermine the potential for the Indian elections to serve as an example for both aspiring and well-establish democracies alike.

Check out the video of the event below!

ISDP would like to express its gratitude towards Mr Quraishi for honoring us with his presence, as well as to the Swedish-Indian Parliamentary Association and the Embassy of India in Sweden for their cooperation in making this event a success.