Summary of the First Event in ISDP’s Transatlantic Perspectives Series 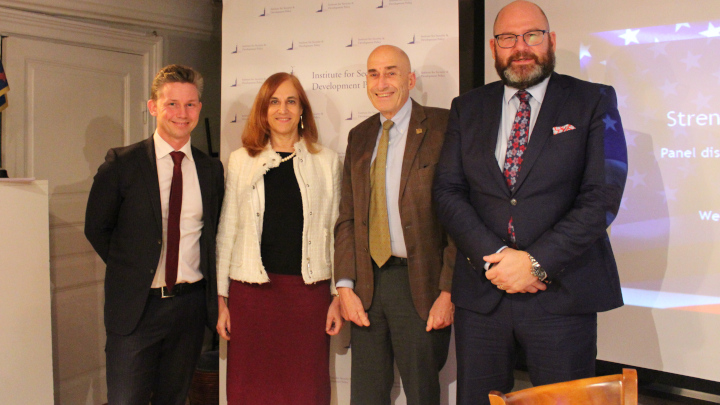 On November 6, 2019, ISDP organized the first event in our Transatlantic Perspectives series which features security policy and international relations experts from the United States participating in public seminars with local counterparts and policymakers in Stockholm on issues of importance to the Transatlantic link between Europe and the U.S. The series is organized in cooperation with the U.S. Embassy in Sweden.

The first event in the series was entitled “Strengthening Alliances in the Indo-Pacific” and featured Ms. Bonnie Glaser, Senior Adviser for Asia and Director of the China Power Project at the Center for Strategic and International Studies (CSIS); Mr. Olle Wästberg, former State Secretary in the Ministry of Finance for the Liberal People’s Party and Swedish Consul General in New York; and Dr. Pål Jonson, Deputy Vice Chairman of the Committee on European Union Affairs, Moderate party, Swedish Parliament.

The first panelist, Bonnie Glaser, explored the state of the rule-based order in the Indo-Pacific, against the backdrop of current US foreign policy towards the region. Ms. Glaser began by discussing recent events of importance, such as the 35th ASEAN Summit in Bangkok, Thailand, the third US-hosted Indo-Pacific business forum, and the updated white paper on the US policy towards the Asia-Pacific. She highlighted the absence of both President Trump and Vice President Pence at the recent ASEAN summit, noting that it is considered very important in Asian countries that invited leaders show up. According to Ms. Glaser, the absence at the summit signals that the US continues to struggle with highlighting the growing importance of the Indo-Pacific and with its relationships with actors in the region.

Ms. Glaser went on to discuss specific US policies which she argues are currently counterproductive, listing the following: the US withdrawal from the Transpacific Partnership (TPP), the Paris Climate Change agreement, and the Joint Comprehensive Plan of Action (JCPOA) with Iran; the refusal to appoint judges to WTO panels; and the Trump Administration’s transactional approach to longstanding alliances. These sudden changes have confused US allies, and indirectly, Ms. Glaser argued, allowed for China to exploit what is perceived to be US indecisiveness in the region. China can use the US’ weakening presence to strengthen its own position, by promoting the narrative that Chinese dominance is inevitable in the face of gradual US stagnation and isolation.

One of Ms. Glaser’s most persisting concerns in the region is the South China Sea territorial conflicts in the context of UNCLOS (United Nations Convention on the Law of the Sea). While the US is not a signatory nation it is adherent to UNCLOS as a part of customary law. China, on the other hand, is a signatory but has been found to be in breach of its obligations under the treaty following repeated naval incursions into Vietnamese territorial waters. Despite these findings, China has defied court rulings and repeatedly signaled to its neighbors that it will not tolerate any attempts to unilaterally extract natural resources in the contended areas. Furthermore, at the Xiangshan Forum of 2019, the Chinese Defense Minister said that regional matters should be settled by regional countries, ultimately in an attempt to weaken US influence, argued Ms. Glaser.

As China grows more assertive abroad, its use of economic coercion increases in tandem. Ms. Glaser expressed deep concerns over this development, citing as examples the stop of rare mineral exports to Japan in 2010 and the sanctions against the Republic of Korea over the deployment of the THAAD missile defense system in 2017. While the EU and the US have enough economic clout to resist such pressures, many smaller nations in the Indo-Pacific cannot.

Ms. Glaser went on to argue that the levels of prosperity in Europe and the Indo-Pacific are very closely interlinked through trade. Seeing as the Indo-Pacific is currently the fastest-growing region in the world, the European FDI (Foreign Direct Investments) in the region is very significant to the EU. As a result, Europe certainly has a stake in the region, and it would be a mistake to only focus on the US-Chinese dynamic or to reduce the EU’s role to the actions and interests of major member states, such as France or the UK. The EU has strong economic clout, Ms. Glaser said, and in the face of a weakening US presence in the region, the EU should step-up and take the leadership role the US has abandoned, instead of leaving gaps for China to fill. In these efforts, the EU should promote the rule of law, cooperative security, and good governance. This can be done by, for example helping BRI countries review contracts to ensure all projects are fully in line with their interests; providing more maritime assistance; giving guidance on common resource management in the South China Sea; and, finally, taking a stand for the ‘freedom of navigation’ principle in unrecognized Chinese claimed waters, just as the US has done.

Mr. Wästberg began his panel presentation by stating that China is trying to become the ‘kingdom of the world’, gradually expanding its interests and influence, both economically and politically. This is done through efforts like buying trade ports in the Indian subcontinent, East Africa, and Southern Europe; using the turbulence of the US-China trade war to raise its international reputation; and sponsoring the tuition of East African exchange students. Unlike Russia, Mr. Wästberg continued, the Chinese government does not use disinformation campaigns to undermine the unity and solidarity of Western society. However, it does use digital campaigns to undermine the democracy of Hong Kong and is increasingly applying more political pressure on Taiwan, ultimately in an effort to more closely align the two entities with the wishes of Beijing. The “One Country, Two Systems” concept is increasingly turning into “One Country, One System”, he stressed.

Mr. Wästberg highlighted how the US officially supports Taiwan but said it is worrying how many countries, including Sweden, are largely silent about the developments in Hong Kong. The recently released Swedish China strategy does not even mention the issue of Hong Kong’s democracy and is sparse on details about Taiwan. Mr. Wästberg argued that Sweden should make more active efforts to raise these issues at the EU level and embrace Taiwan’s “Silk Road to Democracy” initiative.

The third and final panelist, Dr. Jonson, began his intervention by stating that this was a very timely conference, given the recent publication of the new Swedish China strategy and the upcoming deliberations on China in the Swedish Parliament. Dr. Jonson called the rise of China the arguably most significant change in the post-Cold War international system, a change that has major implications for the Indo-Pacific region as it is forced to carefully balance between the two superpowers, the US and China. This rather drastic change has unfortunately caught the European countries off guard, Dr. Jonson said, but further added that while there is a lot of catching up to do, the last two years have been a helpful wake-up call.

On the note of the new Swedish strategy towards China, Dr. Jonson commended the strategy for bringing up the human rights situation in China, as well as the plight of the jailed Swedish-Chinese publisher Gui Minhai. He further supported the inclusion of reports from the Swedish Security Service (SÄPO) on Chinese cyber intrusions and activities in Stockholm. Still, it can be difficult for smaller countries to speak up against China since they often lack the economic clout to withstand retaliatory sanctions from the Chinese government. For this reason, Dr. Jonson thinks it is good that the EU Commission can speak with a unified voice on behalf of its member states, thus allowing member states to take a stand without directly provoking Beijing. One recent example where the EU took a clear unified stance on China was the EU’s Strategic Outlook from March 2019, in which China was explicitly pointed out as an economic competitor and a systemic rival.

Moving on discuss to the transatlantic link, Dr. Jonsson stated that while there exists a limited US-European approach towards the Indo-Pacific, it is still not substantially reflected at the EU-level due to disagreements between the member states. The EU’s Strategic Outlook of 2019 barely even mentions the transatlantic approach, assigning it only two sentences throughout the paper, and this is a key limitation if the EU ever wants to have a significant impact in the Indo-Pacific region. Dr. Jonson listed several steps needed to improve transatlantic cooperation in the Indo-Pacific: the EU needs to mitigate risks at home by adopting a unified position on 5G and by establishing common standards for export and investment screening; the EU needs to diplomatically back the ‘Freedom of Navigation’ operations in the South China Sea; in the absence of military might comparable to that of the US, the EU should use its economic clout to spread its values and regulatory standards, preferably in close cooperation with like-minded partners.

After the three panelists had made their interventions, Dr. Swanström opened the floor for questions. During the open discussion, the following issues were brought up: the prospects for EU-US cooperation in the Indo-Pacific after the upcoming US elections in 2020; economic projections for the Chinese economy; the impacts of the US’ recent withdrawal from the INF treaty; Sino-Russian cooperation in the face of political disagreements; the state of the US alliances with the Republic of Korea and Japan, and the sources of competition between the US and China.

ISDP would be like to extent our deepest thanks to the panelists, to the US Embassy in Stockholm for supporting this event series, and to the very active audience for participating.