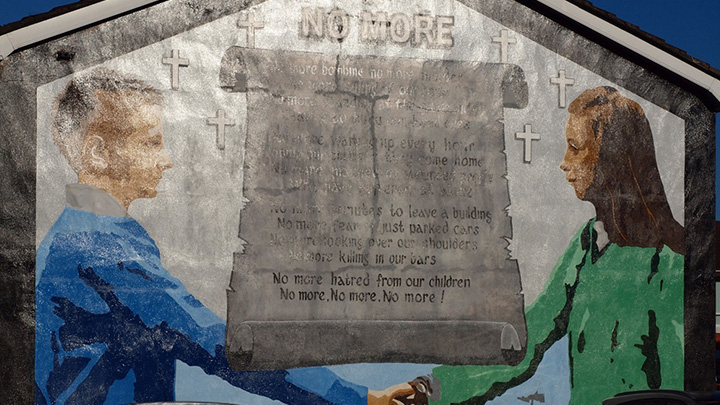 This week marks the twentieth anniversary of the historic Good Friday Agreement of 1998, which signaled an end to the three decades of violence in Northern Ireland known as the Troubles. Renouncing armed struggle, all sides pledged to pursue their aims peacefully through political accommodation. The price had been high: over 3500 deaths, tens of thousands injured, while communities were left with deep psychological scars and grievances.

Peace was not established overnight. Despite the wave of relief and elation, some neighborhoods in fact experienced an upsurge in violence following the agreement, with much uncertainty and suspicion regarding the path ahead. Put to a referendum, only half of the Unionist community who voted endorsed the peace deal. Just a few months later, the tragic Omagh bombing – in which 29 people were killed – was a violent demonstration of opposition to the agreement by a small but significant faction of dissident Republicans who called themselves the Real IRA.

Despite numerous setbacks, however, the mechanisms for peace were gradually implemented. Key milestones, among others, included the decommissioning of paramilitary weapons in 2005, and, following years of suspension, the election of a new Northern Ireland Assembly and power-sharing executive in 2007. A Parades Commission had also been established to rule on contentious parades, while Sinn Fein’s acceptance of the newly reformed Police Service of Northern Ireland marked a breakthrough for the normalisation of law and order.