The Ice Silk Road: Is China a “Near-Arctic-State”? 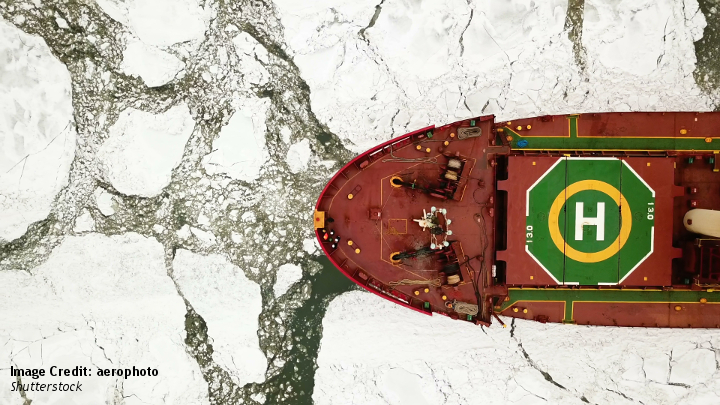 Ms. Maud Descamps explores the economic and political impact surrounding potential new trade routes that could open-up in the Arctic region given the rapid pace of melting polar ice-caps. Her paper provides an analysis on the measures taken by China to ascertain greater access to the region and reap the financial benefits of this new frontier.

Since embracing a market-oriented system, China has become increasingly dependent on foreign trade, with imports and exports having become deeply embedded in Chinese society and economic practice. Reliance on overseas consumer markets and producers means that shipping lanes and port infrastructure are of the utmost importance to Beijing and the Chinese leadership has made sustained economic growth as a national security priority. For this reason, China is seeking new commercial avenues and this thinking plays a key role in the ambitious Belt and Road Initiative (BRI). Global climate change is providing Chinese planners with interesting options to develop new trade routes. While it has very serious and destructive consequences for the global eco-system, the effects of climate change afford opportunities in maritime trade.

The rapid pace of the melting ice-caps is set to openup a 6,000 km sea route through the Arctic; connecting Northern Europe and East Asia. If this new northern passage is accessible enough for sea-borne trade, it would have the potential to upend, or at least significantly alter, the current shipping lanes that dominate the Euro-Asian trade flows. A new northern route, or “Arctic Silk Road”’ as it is sometimes styled by proponents, would represent a noticeable reduction in the time and cost of circum-continental transportation. In addition, while connecting Europe, Asia and North America, an open Arctic passage would present an alternative artery for Chinese trade, enabling it to bypass several important strategic chokepoints. Aside from the perspective of cost-saving benefits afforded by new shipping lanes, a further potential economic “advantage” of climate change in Arctic is energy accessibility. The Arctic represents a massive reservoir of untapped and undiscovered energy resources. Rising temperatures however, will in the medium and long term be a game changer. It is estimated that about 30 percent of the world’s undiscovered gas reserves lie at the bottom of the Arctic Sea, while a potential 13 percent of global oil reserves are situated in the Arctic.

China and the Arctic

All of this considered, it is not surprising that the People’s Republic of China (PRC) is investing heavily in Arctic affairs. Beijing has sought to obtain membership in many international Arctic-related organizations (such as the Polar Navigation and Equipment Committee), engaging in free trade agreements, investment schemes in mining and infrastructural projects, as well as improving diplomatic relations with all the Arctic states.

Factually speaking, China is not an Arctic country: its coasts do not border with the Arctic Sea nor does it claim to have sovereignty on under-continental shelves or water in the Arctic. The PRC defines itself as a “Near-Arctic State” with larger interests drawing its attention toward the region. Back in 2014, President Xi Jinping made public the will of his government to make China a “Polar Power”. As the PRC lacks sovereignty over the Arctic, China is not in a position to conduct resource extraction operations or commercial fishing within foreign territorial waters or international waters as defined by the United Nations Convention on the Law of the Sea (UNCLOS). Beijing’s commitment to this treaty dates back to 1925 when the then Republic of China joined the “Spitsbergen Treaty” (or Svalbard Treaty – established in 1920).

However, today priorities have shifted as the region within the polar circle is continually growing in significance. Nevertheless, as explained in the PRC’s White Paper released this January, the new context of fast changing climate and environment, the opportunities in the Arctic are multiple. Indeed, in terms of the economic potential, scientific insights (establishing weather patterns in light of the change in world’s climate), biodiversity, sea routes, untapped natural resources, as well as the strategic footholds it could grant, the region is of clear interest not only to the Chinese government but to many stake holders. The possible benefit of linking its shipping lanes to the North Atlantic through the region places China at the forefront of Arctic development.

As such, China has developed its own term of classification to link its relations with the Arctic: “a Near-Arctic State.” This use of terminology is indication of the role that Beijing wishes to play and the legitimacy in the region it wants to assert. However, this selfproclaimed status is not granted official recognition in the international rule-based system, nor do the claims propagated by domestic Chinese legislation. More significant is the expression of interest which draws upon Chinese foreign policy in terms of the diplomatic, trade and environmental approach which is embedded in the larger scheme of the BRI. The maritime route in the Arctic, often called the Northern Sea Routes, has become part of the new maritime Silk Road and has entered Chinese planning and strategic thinking. The key role of the Arctic is becoming clear; the question of its governance management, protections and stability is shaped by a number of treaties, among which the UNCLOS is to be found. The Chinese strategy, as shown in its Arctic White Paper, is designed to deflect fears of Beijing’s ambitions. This approach shows China as a Zhilaohu (纸老虎).

Eager but Lacking in Means

Arctic governance covers a large variety of topics ranging from navigational practices, environmental protections and exploration parameters, the latter both for the purposes of scientific research and resource exploitation. China has sought to turn its strategic ambitions into concrete action, highlighted
by the launch of its “Arctic Strategy”, the last of the non-Arctic nations to do so. China has been cooperating with Russia and other states on the basis of a scientific research and resources based partnership, through initiatives such as the Yamal LNG project which depends largely on French (through Total S.A.) and Chinese investment (China National Petroleum Corporation). Both direct participations account for 20 percent of the funding for the Yamal undertaking. Such projects provide an opportunity for China to gain technological insights from Russia, which maintain generally more advanced practices in the matter.

The efforts by Beijing to participate in Arctic affairs and businesses in 2018, resulted in the launch of the first domestically built icebreaker the Xue Long 2 (雪 龙2) or Snow Dragon 2.7. The ship is conventionally powered, running on diesel, similar to its predecessor, the Xue Long (built in Ukraine). However, through the state-owned China National Nuclear Corporation (CNNC), China has opened a bid to begin the construction of its first nuclear powered icebreaker. The terms of the CNNC’s tender requires contractors to allow the Chinese authority to engage in research, developing, building and testing of the icebreaker. The company the bid is awarded to will also be required to provide technological support to Beijing. This practice follows the pattern of gaining knowledge through trade and other partnerships, with a view towards reproducing the newly acquired technology domestically, allowing Chinese leaders to acquire technological independence.

President Xi’s administration is seeking to acquire the knowledge resources necessary to enable the dream of high-tech products stamped with the “Made in China” logo. Beijing is gearing up to further its presence in the Arctic by promoting the Transpolar Sea Route, a passage that would make use over the shorter route past the Arctic circle for commercial and civilian purposes. However, most of the Chinese vessels which to date are able to operate in high north, all of which are ice breakers, belong to the People’s Liberation Army navy (PLA-N) while there is only one ship operated under the aegis of the Polar Research Institute of China (PRIC). More recently, China has been involved in joint ventures for resource extraction in Greenland.10 Ice loss on the island, along with recent policy change reversing Greenland’s “zero tolerance” stance on uranium extraction, has meant that mining opportunities have opened-up to the international market. China’s input of investment has raised some concerns in Copenhagen (Greenland being an autonomous constituent country of the Kingdom of Denmark) and the impact of their presence is being closely reviewed. This highlights how climate change is having a significant effect on the future of global diplomacy, the consequences of which are being felt in some of the most sparsely populated areas of the world.

An Opportunity for the EU to Pitch In?

The development of the Arctic region into a trade artery and a center for resources exploitation can serve as a vital opportunity for the nations along the Arctic Sea to secure funding for development programs. New transportation networks and livelihood promotion programs will be sorely needed by local communities if they are to offset the deleterious effects of climate change.

However, questions of know-how and intellectual property rights remain a source of concern for both European enterprises and governments. The role of China in the Polar arena has recently taken on concrete form for the EU. Aside from the economic, technological aspects, the issue of environmental impact and further damage to the fragile ecological balance in an area exposed to major fluctuations in climate patterns remains a concern.Beijing’s White Paper emphasizes a sustainable approach in order to smooth the development and exploitation of the Arctic region.

A rapid expansion of the BRI into the Arctic Sea, along with the accompanying extraction activities, might easily cause detrimental externalities. The impetus for developing the Northern Sea Routes derives primarily from the perceived need to diversify Chinese reliance on sea routes passing through the Indian Ocean and the Red Sea, to mitigate political or strategic leverage that rival powers or recalcitrant partners might bring to bear. The EU could easily benefit from a similar approach but has a complicated and often hostile relationship with Russia, which remains one of the major forces in the Arctic. The EU itself is not an Arctic power, nor does it have direct coastal access to the Arctic Ocean. Nevertheless, three of its member states are Arctic states: the Kingdom of Denmark (including the Faeroe Islands and Greenland), the Republic of Finland, and the Kingdom of Sweden. As such the EU is an ad hoc observer. Brussels’ contribution revolves around the fishing industry, environmental protection, energy market, transportation infrastructure and funding initiatives targeted at supporting indigenous peoples. These engagement areas are not exclusively within the realm of Union administration, but rather frame joint efforts by member states.