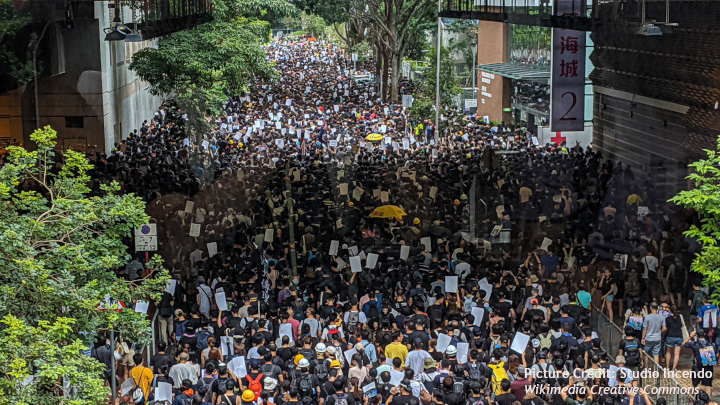 The year has turned out to be equally momentous for Hong Kong. A murder in Taiwan in 2018 allegedly by a young man of his pregnant girlfriend, both of whom Hong Kong permanent residents, has set off, in the words of Zhang Xiaoming, director of China’s State Council’s Hong Kong and Macau Affairs Office, the city’s “worst crisis” since its return to China’s sovereignty in July 1997 after 155 years of British colonial rule.

The furor over the extradition Bill – which, if passed, would empower and compel Hong Kong authorities to transfer anyone in Hong Kong accused of a serious crime committed anywhere to any jurisdiction with which Hong Kong did not have an extradition agreement, including Mainland China – has metamorphosed into a generalized movement uniting Hong Kong people, of all ages and from all walks of life, into expressing their frustrations about Hong Kong’s unelected, unrepresentative, unresponsive and unaccountable government, Hong Kong police’s escalating brutality and questionable tactics and rationales in arresting activists and quelling protests, and alleged collusions on the part of the government and police with triad members in suppressing protests.

Following the failure of the umbrella movement in 2014, Hong Kong and Mainland authorities have been portraying protestors and their actions as illegal, irrational, unreasonable and even terrorist, in hopes that the rest of Hong Kong people will eventually side with the government and police in a war of attrition. Steeped in a political culture of Confucian authoritarianism in which the old and the rich are wise while the young and the less well-off are immature, uninformed or “spoiled”, Hong Kong’s government officials continue to compound their political miscalculations with further colossal failures in policing and in restoring trust.

A general strike on August 5, 2019, and biweekly intense clashes between protestors and the police since July 1 when protestors stormed Hong Kong’s legislature, have failed to bring about any concession from the government (which is no longer a functioning one, as Beijing has begun to issue directives from across the increasingly fragile border). Emboldened (or, perhaps, constrained) by Beijing’s firm albeit misplaced support, Carrie Lam Cheng Yuet-ngor, Hong Kong’s chief executive selected in 2017 with 777 votes by a 1200-member Election Committee appointed by Beijing, has doubled down in her refusal to accede to any of the protestors’ demands – namely, formal withdrawal of the extradition Bill, retraction of categorizations of protestors as rioters, amnesty for arrested protestors, an independent inquiry into police conduct since June 12, and genuine universal suffrage. Using a divide-and-conquer strategy, Lam is blaming protestors for affecting working-class people’s livelihoods. Her pledge in June to “listen” to and engage in “dialogues” with all segments of society, especially young people, is as “dead” as the extradition Bill.

Worse still, Lam is seeking to play on Beijing’s fear of separatism by reframing protestors’ demands as calls for “liberation” and “revolution”, and as threats to China’s state sovereignty over Hong Kong.

In response to unprecedented police violence across the city on August 11, thousands of protestors occupied Hong Kong International Airport on August 12, resulting in cancellations of all flights in the evening, and left only amid rumors of an imminent police dispersal with tear gas and other weapons deployed inside subway stations the previous evening. Over 300 flights were cancelled on August 13 morning, before protestors’ return in the afternoon.

Tear gas is superfluous for Hong Kong people to be in tears over their beloved, and besieged, city. Lam is right about one thing: Hong Kong is being pushed to dangerous territory. The UK Foreign Office has classified the crisis in Hong Kong as a “conflict in fragile states”, alongside Libya, Syria and North Korea.

The danger does not so much stem from Beijing’s thinly veiled threats of People’s Liberation Army intervention in the Hong Kong protests. If Army intervention were to take place, in addition to catastrophic capital flight and mass outflux of people from Hong Kong, the city’s property and stock markets, in which Hong Kong and Mainland tycoons and powerholders have substantial stakes, would immediately collapse. Furthermore, China’s reputation as an international actor that abides by treaties and the international rule of law would be in tatters. Its multilateral endeavors, such as the Asian Infrastructure Investment Bank and the Belt and Road initiative, would come to halt. Its grand national objective of reuniting with Taiwan, for which Deng Xiaoping intended Hong Kong’s “one-country/two-systems” formula to be an experiment, would be irretrievably scuppered.

The likelihood of Beijing crossing the Rubicon, with Army intervention in Hong Kong playing, on live international coverage, alongside fireworks and celebrations in the Chinese capital on the National Day, October 1, is, therefore, remote.

Beijing is absolutely right that one who plays with fire perishes by it. In extinguishing a fire, locating its source is chief. Otherwise, Hong Kong, in Lam’s words (in Chinese, 玉石俱焚: jade and stone both incinerated), will be “kamikazed”. The source of this ongoing fire is Lam and her government.

Certainly, protestors’ defacing the national emblem at Beijing’s Liaison Office in Hong Kong on July 21 and throwing the national flag into the harbor on August 3 were ill-advised and regrettable. Beijing has condemned what it considers to be serious challenges to China’s state sovereignty.

Nevertheless, sovereignty is not about emblems, anthems or flags, sacred they may be. Equally, it is not about imposing the will of the state on its people. Rather, sovereignty is about the state protecting and enabling all of its people to embrace and pursue its goals, visions and ideals collectively, and accepting differences within its territory, with a view to its betterment and progress. China, after all, is a people’s republic. It is in being able to build on differences within a polity that makes a state great, and that nurtures and bolsters patriotism, harmony and stability in a way that no propaganda video, or even national education, can.

President Xi Jinping in 2018 at the Great Hall of the People praised Hong Kong’s “unique and irreplaceable” roles in China’s success. Hong Kong, as part of a prosperous China, deserves and requires a functioning government in which people can place their faith. It urgently needs a fresh start in order for all Hong Kong people, of all political persuasions, of all ages and from all walks of life, to heal and to engage dispassionately in dialogues about Hong Kong society and the myriad roles Hong Kong plays in China’s greatness.

Regardless of Beijing’s expressions of support, Lam, and her government, has lost all political and moral authority and legitimacy. Hong Kong people have not forgotten Lam’s pledge during her campaign in 2017 for the chief executive’s office that she would endeavor to heal and unite Hong Kong’s polarized society, failing which she would resign. Taking responsibility does not mean staying on. It means accepting the fact that one has failed, and accepting the reality that Hong Kong is better served by another person as chief executive (even if still unelected). Lam’s lingering at Government House gravely holds Hong Kong’s governance in abeyance, deepens the schisms within society, poisons relations between Hong Kong and Mainland compatriots, and delays Hong Kong’s healing. Lam’s and her government’s arrogance, incompetence and impotence has already caused immense damage to Hong Kong and Hong Kong–Mainland relations.

For these reasons, it would be a strong exercise of state sovereignty for Beijing to hold Lam accountable – to Beijing, if not to Hong Kong – for mismanaging Hong Kong, demand her resignation, and direct the formation of a new government in Hong Kong. In doing so, Beijing will demonstrate that Hong Kong and the Mainland truly are one country, in which Beijing shows its benevolent concern for Hong Kong society and Hong Kong people see that Beijing listens to and cares about them.

Unless Hong Kong manages to come out of this purgatorial Groundhog Day, it is diminished, if not finished, with or without the Army. At the same time, a China that could not take good care of its home and its people would be hard pressed to continue its peaceful rise in the world. Such is the essence of “country” in Chinese (国家).