Compatible Interests? The EU and China’s Belt and Road Initiative 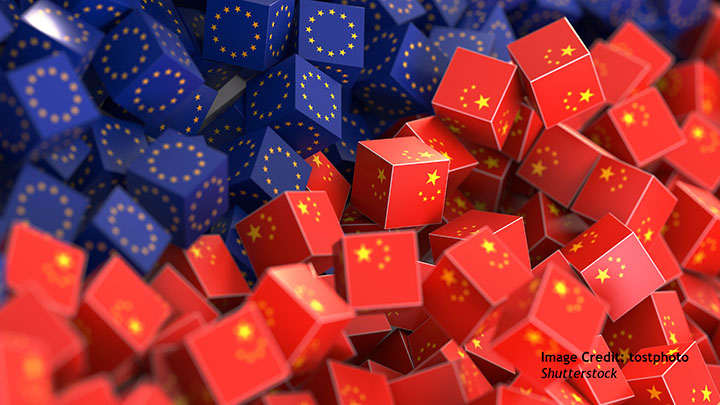 While China and the European Union are at opposite ends of the Eurasian continent, booming trade, along with China’s rise as a global power, has made their relationship increasingly multi-faceted. The launch of China’s Belt and Road Initiative, which reaches into the EU itself, has raised questions about the initiative’s implications for Europe. While the EU, China, and the countries
between them all share an interest in the development of continental trade routes, the opacity and modalities of the BRI have led the initiative to be increasingly controversial. However, the BRI cannot be seen in a vacuum: the rise of a more assertive China is taking place in parallel with the challenge of managing a more aggressive Russia, an increasingly chaotic neighbourhood east and south of the Mediterranean, and a transatlantic link that is increasingly in doubt.

This study seeks to answer several questions that the BRI has raised for the EU. First, what are the implications of the initiative, particularly in Eastern European and Eurasian states? This includes an analysis of what China is seeking to achieve, how the BRI is structured, and what implications it has for the rule of law and political and economic development in the states concerned. Second, how do Chinese interests compare with the EU’s own interests in this region? This requires the study to determine what the EU’s interests are, how it has sought to achieve them, and how the EU’s approach to these regions – and to China – has evolved. The third and most important question is whether the Chinese and EU interests are compatible.

The BRI emerged in 2013, twenty years after the EU itself launched a project to create a transport corridor linking Europe with China across the Caucasus and Central Asia. In this sense, both the EU and China are working towards what the World Bank has termed “one of the main defining features of the twentyfirst century,” namely the re-integration of the Eurasian continent following the collapse of the Soviet Union. In addition, the rationale for such transportation links is apparent: the EU, China, and the countries between them stand to benefit from the opening of continental transportation routes to complement the over 90 per cent of Europe–China trade that is carried by sea or air.

The BRI was launched as a series of land corridors through Eurasia, complemented by a maritime network across the Indian Ocean. China’s presence in Central Asia predates the announcement of the BRI, as the Chinese infrastructure project was developed from the late 1990s onwards. More recent is China’s economic outreach to countries closer to the EU, including Ukraine, Belarus, Turkey, and the South Caucasus. Most noteworthy is the 17+1 initiative (previously 16+1 until Greece joined in April 2019), which brings together a mix of EU members and aspirant countries in Eastern and Southeastern Europe.

The BRI is an attempt to achieve a holistic framework for the development of global mega-projects designed to increase connectivity and trade between China and the rest of the world, and in this sense it is in line with previous Chinese economic policies but unprecedented in its scope and ambitions. Beyond its impact on connectivity, the BRI is a response to the overcapacity weighing
down several sectors of China’s economy by allowing the development of new opportunities for Chinese enterprises confronted with a saturated domestic market. It is also connected to China’s transition to a new economic model that seeks to redirect the drivers of growth from external to internal factors, with the BRI serving as a shock absorber to reduce the negative spillovers from the
economic rebalancing. Finally, it serves to counter the regional development disparities in China by boosting development in inland areas, which have developed more slowly than China’s coastal regions.

While China presents the BRI as an inherently economic project, it has important geopolitical implications. Reducing the reliance on maritime chokepoints is by itself a geopolitical goal, but the BRI also serves to reassert China’s geopolitical influence in Eurasia and the Indian Ocean and contributes to balancing the US presence in the region. The development of port facilities and coastal infrastructure under the Maritime Silk Road initiative also serves to facilitate the development of Chinese blue-water naval capabilities. Thus, the BRI is inextricably linked to China’s long-term vision of its role in world politics in the middle of the twenty-first century.

The BRI is extremely expensive, with total investments in the trillions of dollars. China has implemented a vast financial network to support it, backed by multiple public and private actors. The key financiers of the BRI are China’s “policy banks” and large non-commercial banks as well as newly set up sovereign wealth funds and novel financial institutions like the Asian Infrastructure Investment Bank. Still, the scale of the BRI means that it requires the influx of private investors to finance its projects, and the financial challenges involved are significant: these include concerns about the sustainability of a financial model mainly carried by Chinese state-owned banks and the lack of transparency in the financing process, including the terms and conditions of the loans and the lack of coordination between financial donors. Ensuring debt sustainability has emerged as one of the most important issues. Several observers have raised concerns over the long-term implications of the Chinese debt-financed infrastructure, warning of a debt trap – there are already several cases in which projects have put recipient countries in debt distress, forcing them to grant China a lease on their lands.

Aside from this, several successful achievements should not obscure the fact that there has been a large number of “white elephant” projects that have failed to materialize, for example as a result of conflicts with the local population over either environmental concerns or the Chinese insistence on bringing Chinese labour for construction. In addition, while China has promoted an alternative set of norms and ideas on governance and cooperation that differs from the Western governance model – theoretically based on win–win thinking and South–South cooperation, within the implementation process, it has often been perceived as neo-colonial and focusing on China’s gains at the expense of local partners. Furthermore, because Chinese financial aid comes without economic or political conditionality, Western donors have criticized it for eroding the bargaining power of their own agencies and thus undermining the efforts to improve good governance, human rights protection, and the rule of law in aid recipient countries.

Meanwhile, the EU’s approach to the countries to its east has been indexed almost exclusively on the question of European integration, grouping states on the basis of their level of integration with EU institutions. As such, the EU has not paid considerable attention to its concrete political or economic interests in designing instruments for its relationships with candidate states like Turkey or
Southeastern Europe, associated states like those of the Eastern Partnership, or external partners like Mongolia or Central Asia. Thus, geopolitical, economic, or trade factors have been secondary at best in EU thinking, which may have made sense in the immediate post-Cold War era but no longer does in an era when the EU’s relationship with the countries to its east cannot rely solely on the power of its normative values. Recent experience has suggested that a new approach is needed – one that will focus to a much greater extent on European interests, not solely European norms and values. The EU must act not only as a European project but as a European power.

From this perspective, China’s rise presents important opportunities: Beijing’s involvement in Central Asia, and more recently in Belarus and Ukraine, has helped to strengthen the sovereignty and independence of the region’s countries, a goal shared by the EU. Geopolitically, all the talk of a Russian–Chinese alliance obscures the reality that, in Eurasia, China’s interests appear to be aligned more with the EU than with Russia.

Still, the problems involved with the BRI listed above also pose challenges for the EU. Beyond problems of debt and corruption, the growing Chinese influence cannot be dissociated from the model of governance that China is increasingly promoting – one built around a single party led by a strong leader. To the extent that China is promoting this model in its foreign relations, it stands in direct contradiction to the governance model that the EU is seeking to promote. When China promotes it within the boundaries of the EU itself, it becomes tantamount to a direct challenge to the EU’s internal governance. The Chinese influence potentially forms a direct counterweight to the European political norms that transcend the EU border itself.

For future EU policies, this reality calls for an engagement with China and the BRI that is driven by clearly identified European interests. This would entail recognizing common interests but engaging with aid recipient states in a way that influences the manner in which they frame their ties to Beijing. This would mean tailoring EU policies to the estimated impact of Chinese activities. Concretely, this approach could mean complementing China’s focus on hard infrastructure with an emphasis on rule of law, capacity building, and institutional reforms, along with supporting European investment banks to promote infrastructural projects that are in the interests of the EU and aid recipient states. It could also mean targeting Chinese companies directly for sanctions if, for example, they violate EU legislation in EU countries. Such an EU approach would signal that the EU and China have common interests and that the EU is prepared to support some Chinese efforts that are key to its leadership but that the EU is also willing to stand up for its own interests and to defend them against Chinese encroachments.