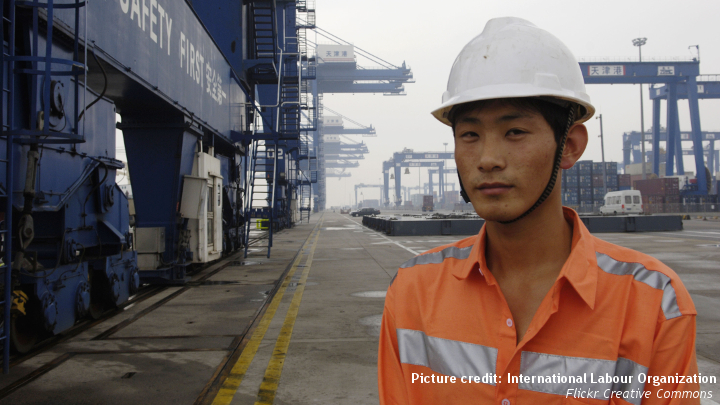 In China, rising economic and social inequality mean that labour tensions are high. President Xi Jinping has responded with a new idea where the All China Federation of Trade Unions and collective bargaining can emerge as strong forces that will harmonize industrial relations. Yet, Chinese workers do not have the right to organize freely or to strike. Still there are some signs that Beijing is moving beyond pure rhetoric and Nordic trade unions could become a key agent for change.

In 2008 China promulgated a comprehensive and ambitious labour legislation with the Labour Contract Law, the Mediation and Arbitration of Labour Disputes Law, and the Employment Promotion Law. Yet despite legislative efforts to strengthen workers rights, labour tensions have risen in response to growing social inequality. China Labour Bulletin, a Hong Kong based NGO recorded a rising trend of strikes from 1,300 in 2014 to 2,600 in 2016. Labour disputes have also seen a sharp increase. In 2007 for instance, there were around 350,000 labour disputes but this number has risen to 700,000 each following year. These statistics most likely only show the tip of the iceberg as the country still grapples with accommodating even the most basic labour rights. Obviously, the problem is not the labour laws but the lack of political reforms that shift the power balance between employers and employees. There are signs that change is underway; but with a heavy authoritarian pretext.

Towards the ACFTU & Collective Bargaining

The All China Federation of Trade Unions (ACFTU) is a mass organization led by cadres that pursue a political career within the Party or Government organizations. It is the sole legal representative of Chinese workers. During China’s high growth era, it has been reluctant to defend labour rights and instead regularly sided with employers and managers.  Aligning the ACFTU with vested business interests was possible due a top-down nomination process. As a result, government and party officials who have strong political incentives to attract investments, usually chair local trade unions while most employee representatives are recruited at the management-level. By global standards, labour relations in China do not fare well. The International Trade Union Confederation (ITUC), for example, ranks China under its fifth category, i.e. “…the worst countries in the world to work in. While the legislation may spell out certain rights workers have effectively no access to these rights and are therefore exposed to autocratic regimes and unfair labour practices.”

For a time, NGOs and lawyers tried to fill the gap of limited workers’ representation but crackdowns and mounting political repression since 2013 have suffocated many civil society initiatives. Instead, President Xi Jinping propagated a new dream where the ACFTU is resurrected as a strong force that can bring harmony back into industrial relations. The core of this strategy is collective bargaining; a process through which workers and their representatives negotiate contracts with their employers. Usually it is organized as a sectoral, multi-employer practice with the aim to limit unfettered competition on wages.

Collective bargaining facilitates an orderly mode of balancing stakeholder interests, which in turn contributes  to greater economic equity and social peace. Beijing’s vision for the future of industrial relations is somewhat inspired by the German and Scandinavian model where collective agreements are unified as they apply to entire sectors or regions and even include firms that are not participating in negotiations. Yet, recent developments suggest that China will most likely host a variation of bargaining models rather than a unified approach. The most prominent experiments of this approach have been in Guangdong and Zhejiang.The ‘Guangdong model’ of collective bargaining emerges in a context of large-scale, export-oriented manufacturers and promotes a hybrid worker representation. The so-called ‘Wenling model’ that emerged in Zhejiang is geared towards clusters of small and medium size firms. Even though local government authorities lend their support to collective bargaining, the process is mainly shaped by multi-employer associations and Sectoral Trade Union Associations (STUA).

These emerging collective bargaining models point towards strengthened worker representation due to three major changes: Firstly, in 2001, the revised Trade Union Law promoted collective bargaining. Yet it remained only on paper in a political climate where low cost labour is a key strategic priority. The fact that provincial and municipal leaders now seek to profile bargaining models and that Beijing’s top leadership endorses successful examples shows that collective bargaining has received priority status. Secondly, local trade union representatives tend to have very weak connections to workers. Trials with democratic elections of workers representatives are a step forward in strengthening legitimacy and eventually bring workers’ claims to the negotiation table. Thirdly, and closely connected to this hybrid model of union cum worker representation, is a shift from rights- towards interest-based negotiations, i.e. collective agreements which entail more items and move beyond statutory guaranteed minimum requirements such as regular wage rises, or skill-based salaries.

The question is whether emerging collective bargaining models in China will become a motor for promoting workers’ rights as human rights, and in particular, the International Labour Organization’s (ILO) eight fundamental principles. Obviously, the biggest challenges are the first two principles, which demand freedom of association and the effective recognition of the right to collective bargaining. Independent trade unions are unimaginable under the Communist Party of China’s power monopoly. The crackdown on independent worker centres and related detention of prominent labour activists in December 2015 reaffirmed that the Chinese state is prepared to make use of repressive means to reclaim worker representation as the sole matter of the ACFTU. The policy agenda of the ACFTU usually deals with ideological or macroeconomic directives. Practical labour issues are handed down to grassroots unions at the enterprise-level. Accordingly, enforcement of labour rights can vary substantially between factories and largely depends on the relative power of individual enterprise trade union members. Moreover, increasing recruitment of union representatives from managerial-positions lessens the ability of rank and file representatives to promote workers’ interests.

Due to its authoritarian structure, independent labour unions worldwide have been reluctant to maintain official relationships with the ACFTU. Yet opinions are divided. Unions such as the Federation Dutch Labour Movement do not interact with the ACFTU since they fear engagement will legitimize them. In contrast, Nordic trade unions and in particular Swedish unions have been proactive. For example, Swedish IF Metall has maintained relationships with the ACFTU since the early 1990s. Also, the Swedish Trade Union Confederation (LO) and the Swedish Confederation of Professional Employees (TCO) have been in dialogue with the ACFTU for many years.

Swedish trade unions take the view that autonomy of Chinese trade union entities at the firm level can open possibilities for meaningful cooperation while they see little value in exchanges with ACFTU’s higher ranks. The strategic focus lies on corporations with Swedish investments and concrete issues such as workers’ health and safety. Long-standing relations at the grassroots level, and the model character of Nordic collective bargaining open a window of opportunity to support on-going experiments with democratic worker elections. Combined, these characteristics may be instrumental in strengthening rank and file representation in enterprise trade unions.

First, more recent strategic shifts of the international labour union movement may complicate matters. In particular the International Trade Union Confederation supported the ACFTU to gain a non-elective seat at the ILO governing body in lieu of Nordic representation. ICTU members seem to follow this strategic shift. In 2015, for instance, the Nordic Trade Union Confederations (LO) met an ACFTU delegation led by its vice president Fan Jiying in Copenhagen. High-level talks most likely are not conducive for promoting workers’ rights through collective bargaining. Instead, there is a risk that these meetings come up with top-down organized collaboration projects that the ACFTU leadership can use as an alternative to democratic grassroots experiments.

A second major drawback for collective bargaining is the de-facto ban on strikes as a means to enforce workers’ claims. The right to strike entered the Chinese constitution in 1975 but was removed in 1982. Moreover, even though there is no explicit law that prohibits strikes neither the Labour Law nor the Trade Union Law acknowledges it as a right held by workers and trade unions. Thus, participants of a strike are not immune to criminal or civil prosecution. Despite the risk of legal retaliation and political repression , strikes occur frequently in particular along China’s prosperous East Coast but also in impoverished Provinces in Central China. Most strikes, however, emerge spontaneously and hence lack the power of systematic collective workers’ organizing. The right to strike is a basic human right in the Covenant on International Human Rights. Chinese state authorities often take a cautious stance and try to mediate between workers and employers. This, however, is no indication of a weakening stance. In the past, minor concessions in combination with acts of intimidation and leader targeted retaliation tended to be sufficient to undermine collective action. Due to the increasing number of strikes the future of conflict resolution is uncertain. But what seems to be clear is that any sign of organized labour action or political demands will trigger harsh responses.

Finally, despite enhanced effectiveness and comprehensiveness, it is unlikely that China will fully converge towards the Nordic model because collective bargaining is envisioned as a developmental tool rather than an institution in its own right. The swift deregulation of labour relations since 1993 was a consequence of China’s export-led growth strategy. The global financial crisis in 2008 marked the end of this growth model and eventually gave way to an alternative framework that seeks to promote domestic demand. In this new Keynesian political context rising wages are not only perceived as a threat to competitiveness but also as a novel source for indigenous growth. Thus, there is a macroeconomic dimension to the re-regulatory turn since 2008. Collective bargaining, therefore, is synchronized with broader economic and political interests. This observation is evidenced by negotiation strategies that often refer to the current five-year plan in order to legitimize the economic objectives of a bargaining process.

Collective bargaining in China is a work in progress. The political push for universal and effective negotiations with the aim to rebalance economic interests can bring about better protection of workers’ rights. At the same time human rights violations in industrial relations have become more severe as Beijing repressively reinstates the ACFTU’s bargaining monopoly. Nordic trade unions can play an important role in this context, as their expertise is in high demand in a country where local governments and trade unions face increasing pressure to make real progress.

Dr. Stefan Brehm is a Research Fellow at the Centre for East and South East Asian Studies, Lund University.