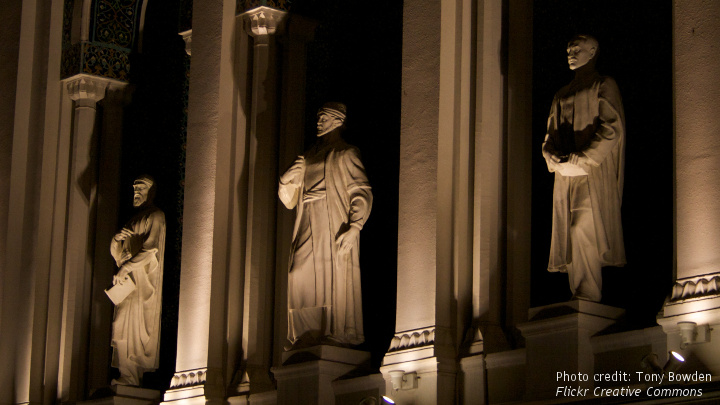 In January 2016, Azerbaijani President Ilham Aliyev designated 2016 the “Year of Multiculturalism.” This took place at a time when Azerbaijan’s neighborhood has experienced a trend toward less rather than more separation between religion and state; and toward more ethnic rather than civic conceptions of nationhood. This trend has been particularly pronounced in two powers with whom Azerbaijan is closely connected, Russia and Turkey. Yet Azerbaijan has chosen to go in the other direction, doubling down on the country’s commitment to secular governance and an inclusive conception of the nation.

This is happening against the backdrop of often confused intellectual debates in the West on matters relating to national identity and secularism. The past few decades have seen a growing effort to deconstruct the traditional divide between ethnic, particularistic conceptions of nationhood and civic, universalistic models. Indeed, Western intellectual discourse has come to decry the concept of nation itself – whether ethnic or civic – as a political fiction promoting homogeneity, imposed by force. From this perspective came the concept of multiculturalism in its Western understanding. Yet as a result of mounting difficulties to integrate immigrant populations and the challenge of Islamic extremism, this discourse has lost much of its power of attraction. In its place, the idea of the nation-state appears to be making a comeback.

In parallel, conceptions of secularism remain divided between the primarily Anglo-Saxon model focused on promoting individual religious freedom, and the French model of laïcité, which focuses on protecting state and society from religion. The former model has gained widespread adherence, and forms the basis for various European conventions and inter-state agreements in the area of minority protection. However, most secularists in the Muslim world have perceived the French model as the most appropriate to their particular situation. Azerbaijan is no exception.

The Azerbaijani model draws on a long history dating back to pre-Soviet times, which includes the proclamation in 1918 of the first republic in the Muslim world. This republic was, from its inception, committed to secularism and espoused an inclusive conception of the nation known as Azerbaijanism. The republic was not destined to survive, however, but was absorbed into the Soviet Union, where Azerbaijan received status as a distinct union republic. From the 1930s, however, Soviet ethnic engineering introduced elements that affected Azerbaijani identity: in particular, it contributed to minimizing connections to Turkey and emphasizing instead the indigenous roots of Azerbaijani identity.

The transition to independence made matters of identity central to Azerbaijani politics. With minor exceptions, the country’s political forces retained a strong commitment to secularism. However, a more ethnic, Turkist, understanding of national identity briefly gained salience under the Popular Front government of 1992-93, something that exacerbated centrifugal tendencies among the country’s minorities. With the return to power of Heydar Aliyev in 1993, state policies veered back toward the policy of Azerbaijanism, which promotes a civic conception of the nation inclusive of minorities. Under Ilham Aliyev’s presidency, the government has given renewed emphasis on these issues, introducing the term “multiculturalism” in official parlance as the definition of the Azerbaijani model.

At present, Azerbaijan’s policy in the religious sphere is quite clear. The government seeks to regulate religion through a triumvirate of institutions – the Caucasus Muslims Board, the State Committee for Work with Religious Organizations, and the State Security Service. The Caucasus Muslims Board is tasked with regulating all Muslim congregations in society, and projects a model of Islam that is moderate, inclusive and tolerant. Indeed, Azerbaijan has launched the unique feature of “unity prayers” where Shi’a and Sunni Muslims pray jointly in the same mosque. The State Committee, created in 2001, is the direct arm of the executive power in religious affairs, which supervises all religious  organizations in the country. Finally, the State Security Service intervenes specifically in cases where religious groups are deemed a national security threat. Thus, in the religious sphere, Azerbaijani authorities have created complementary institutions with comprehensive mandates. Indeed, over time, legislation has been passed that has increased the regulatory power of these institutions, particularly as the state has worked to minimize the influence of foreign religious actors. These institutions have sought to exert control over religious literature, education and training, as well as to supervise the contents and delivery of sermons, pilgrimages, and any activities and finances of religious associations.

In the area of national minorities, by contrast, the picture is less clear. The institutional complementarity visible in the religious field has not developed; in fact, a certain institutional vacuum is visible in the area of national minority issues. Azerbaijan has espoused a model of state-minority relations that focuses on the programmatic and policy levels rather than the legislative or institutional. Rather than working actively to proactively include minorities as groups in formal decision-making, the government’s approach is based on a negative liberty paradigm.

This stems from Azerbaijan being torn between two models: the “multicultural” and the civic. Azerbaijan is trying to thread a needle by developing policies of civic nationhood that focus on the role of the national language as the unifying force in society; while it simultaneously rhetorically promotes ethnolinguistic pluralism and adopts the term “multiculturalism” as a guiding idea. Meanwhile, in practice national minorities are integrated in the country’s economic and political system mainly by informal means. This “hybrid” model is understandable, given the Soviet heritage and the tumultuous transition to independence. But in the long term Azerbaijan’s leaders will have to develop a more clearly defined and internally consistent model of national identity and minor ity policy. This study finds that Azerbaijan is moving increasingly toward the promotion of inclusive, civic nationhood, a model focused on national unity and the promotion of the state language – which inherently sits uneasily with the promotion of the separateness of national minorities. At present, Azerbaijan has signed European conventions on national minorities that states based on the civic model (such as France and Turkey) have rejected – but finds that its promotion of civic nationhood prevents it from implementing them.

Western criticism of Azerbaijan’s model in the field of national minorities stems largely from this contradiction, and should be seen in this context. In the field of religious matters, however, Western and particularly American criticism stems from a failure to accept the legitimacy of the French-inspired, laïcist model that Azerbaijan espouses. As a result, U.S. institutions like the State Department’s Commission on International Religious Freedom find themselves in the peculiar situation of censuring Azerbaijan for seeking to promote the export of extremist religious influences from Iran and the Gulf region.

This study finds that Azerbaijan’s Western partners should view Azerbaijan as a largely successful and functioning laboratory for a civic nation and moderate Islam in the modern world. It should embrace the strengthening and improvement of secular statehood there as a strategic goal, as well as the continued secular nature of law, courts, and educational institutions. This study accepts that Azerbaijani authorities at times err on the side of excessively restrictive measures. But it finds that the influence of Western recommendations is undermined by their failure to accept the underlying legitimacy of Azerbaijan’s general approach.

Recognizing the ample shortcomings and deficiencies that exist, Western governments and institutions should work patiently but tenaciously with government and society to correct them, but on the basis of an acceptance of not only the legitimacy, but the positive value of the Azerbaijani model. This strategic goal should be assigned the same level of importance as security, democratic development, the protection of rights and freedoms, and economic development. Indeed, the advancement of secular governance, courts, and education may prove not only to be the key to progress in the other strategic areas but the most lasting contribution the West can make.