Video and Summary of the ISDP Forum “The Status and Treatment of Foreign Fighters in International Law: New Challenges for an Old Phenomenon” 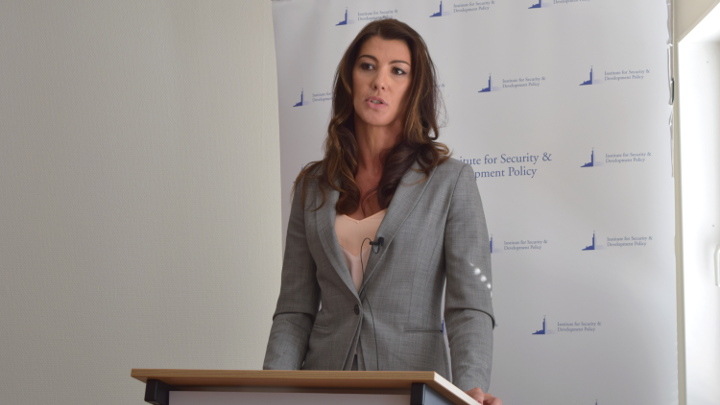 On October 6th, the Institute for Security and Development Policy was pleased to welcome Dr. Dominika Švarc, Dean of the Law School of the American University in Bosnia and Herzegovina, for a special presentation on “The Status and Treatment of Foreign Fighters in International Law: New Challenges for an Old Phenomenon”. Dr. Niklas Swanström, Executive Director of ISDP, welcomed Dr. Dominika Švarc and moderated the discussion.

Dr. Švarc first discussed the historical context of Foreign Fighters, arguing that while the phenomenon is not a new occurrence there is no clear legal definition of what constitutes a ‘foreign fighter.’ In the context of the current conflicts in Iraq and Syria however, the issue has attracted the attention of policy makers, in part due to the rapid pace and large scale of the influx of foreign nationals wishing to take part in conflicts in the Middle East. One of the striking features of the war in Syria and Iraq is the geographic and demographic diversity of those traveling to the region, hailing from over 100 countries and including men, women and children.

One of the difficulties of dealing with the phenomenon of Foreign Fighters on a policy level is the lack of clarity under which legal regime they should be treated. Can they be understood as ‘combatants,’ a status which would require a definition of the conflict they are participating in, ‘mercenaries’ or ‘terrorists?’ The distinctions between these various categories is increasingly being blurred by legal institutions and policy makers.

She built on this point, stating that whilst it is of course necessary to try and tackle the rise of Foreign Fighters with effective policy, we are in danger of adopting extreme legislative measures as was seen in the Post 9-11 fear. Recently there have been laws adopted by certain European countries which not only ban travel to Syria and Iraq but attempt to criminalize mere intent to travel. It is very difficult to prove that someone traveling to the region is doing so with the intent to join a militant training camp or whether he/she is simply trying to see relatives. Add that to the knowledge that certain states have even been revoking passports, we start to see a real infringement on some of the most basic human rights laid out by the United Nations.

The issue of Foreign Fighters and related problems, will continue to be a problem for policy makers in the future. Dr. Švarc stressed that in light of these developments it is important to better understand the phenomena of radicalization and strategies for prevention in order to develop effective strategies to strengthen security and address the potential risks of returning fighters.