Summary and video of the ISDP Forum Is there hope for democracy in Turkey? 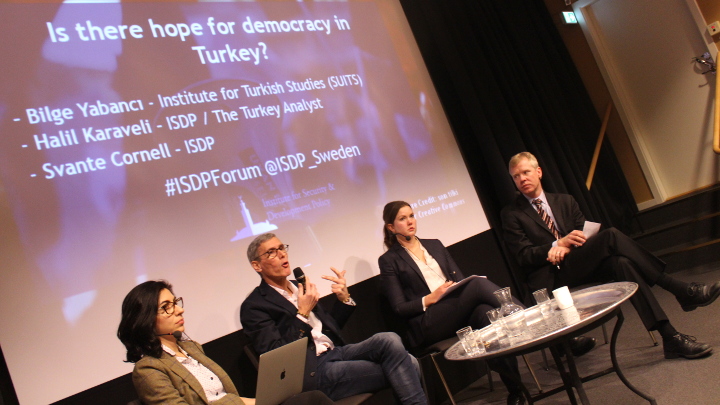 On November 21st, 2017, ISDP organized a forum on the topic “Is there hope for democracy in Turkey?”. Three distinguished speakers were invited to participate in the discussion: Dr. Bilge Yabancı, postdoctoral research fellow at Stockholm University Institute for Turkish Studies (SUITS); Mr. Halil Karaveli, ISDP senior fellow in the Turkey Centre and editor of The Turkey Analyst; and Dr. Svante Cornell, Director of ISDP.

Dr. Cornell started off the discussion stating that most political decisions in Turkey were ‘informal’ and non-legally binding. Mr. Cornell also noted the difficulty for Islamist or nationalist to win an election with the 10% political threshold. He thus suggested that Turkey should legally evolve to a presidential system.

Following this, Mr. Karaveli went on mentioning that  the “civil war” within the ruling Islamist camp – between the AKP and the Gulenists – which culminated with  the 2016 Gülenist coup attempt, has severely fractured the Turkish state. Mr. Karaveli pointed to Turkey’s historic legacy: the  lack of a social democratic alternative  and the historical domination of the right wing in Turkish politics and the  ethnic conflict with the Kurds , as well as the rift between Turkey and the West, which bolsters   Turkish neo-nationalism . He  also highlighted the fact that Turkey’s adherence to the West since the 1950s has not encouraged any evolution of democracy.  He argued that the formation of a progressive bloc of Turkish and Kurdish social democrats would offer a way of out the impasse, but that this is not likely to happen since  the Turkish social democrats remain beholden to Turkish nationalism and are thus unable to  transcend the ethnic divide and provide the necessary democratic leadership.

Dr. Yabancı agreed with Mr. Karaveli in that right- wing nationalist parties have dominated the electorates, which leaves little room for alternatives. On the other hand, she illustrated intra-party dissidence within the AKP and continued civil resistance in different ways in Turkey. She also remarked the purge of prominent party dissidents left the AKP with a weak party organization composed of Erdogan loyalists which are tied to the party through vested interests to be able to have access to perks and benefits. She argued that the increasingly incompetent and unreliable party organization is difficult to keep together through Erdogan’s personal charisma and to effectively mobilize the electorate in the long term and might challenge Erdogan’s grip on power. She was skeptical towards Aksener’s party, as it did not offer a new ideological line and continued to embrace Turkish nationalism and Islam.

The forum ended with an open Q&A session covering topics such as Turkish party politics between the AKP and MHP. ISDP would like to thank all speakers and members of the audience for contributing to this forum.

Watch the video from the event here.