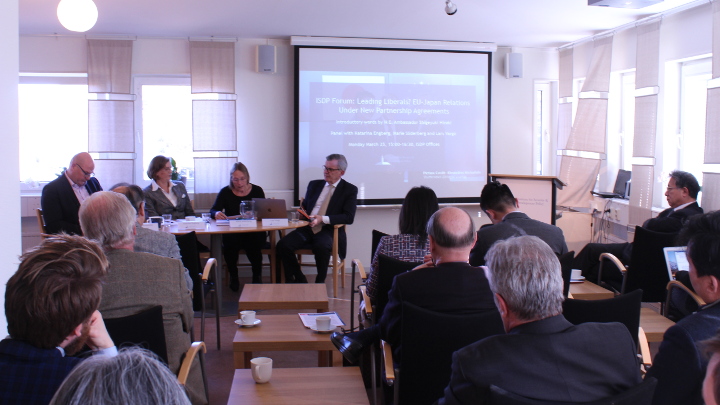 On March 25, 2019, ISDP hosted a forum entitled “Leading Liberals? – EU Japan Relations Under the New Agreements”. As the Economic Partnership Agreement (EPA) entered into effect on February 01, 2019, along with the Strategic Partnership Agreement (SPA) coming into force provisionally, this forum sought to shed light on the opportunities and limitations that the new agreements will bring for EU-Japan relations.

The initial keynote presentation was delivered by Japan’s Ambassador to Sweden, H.E. Mr. Shigeyuki Hiroki, followed by a panel discussion with Dr. Katarina Engberg, Senior Advisor at the Swedish Institute for European Policy Studies, Dr. Marie Söderberg, Director of the European Institute for Japanese Studies at the Stockholm School of Economics, and Dr. Lars Vargö, Head of the Stockholm Japan Center at ISDP. The forum was moderated by Dr. Niklas Swanström, Executive Director of ISDP.

During his presentation, Ambassador Hiroki underlined the significantly positive effects the two new agreements will have on EU-Japan relations. Two like-minded partners with common values, he noted, should strive to uphold the liberal international order, including free trade, the rule of law, and democracy. Hinting at increasingly protectionist economic tendencies worldwide, Ambassador Hiroki noted that by raising bilateral relations to a higher level of cooperation, both parties will be able to counter this trend.

Pinpointing the situation in Sweden, Ambassador Hiroki explained that small and medium-sized companies will be the key beneficiaries of the new free trade agreement. Accounting for a total of 40 percent of global trade, the EU and Japan will have a decisive leverage to push for trade liberalization. Besides the more prominent economic partnership agreement, the new SPA will further strengthen bilateral relations as it seeks to tackle common global challenges in uncertain times. Ranging from environmental issues and energy security to counter-terrorism measures, the agreement covers a total of 40 areas in which both the EU and Japan wish to extend their cooperation. Ambassador Hiroki ended his presentation by reiterating that it is the comprehensive nature of both agreements which holds great potential to advance EU-Japan relations in the future.

Following the keynote presentation, the panel set out to examine the prospects and limitations of the agreements in bolstering EU-Japan relations. All panelists agreed that the SPA was far less concrete than the EPA and that it would require substantial modifications in order to be considered a break-through agreement. Dr. Katarina Engberg noted that with both parties facing similar challenges it was a positive sign that we now see a “flurry of agreements” to address these. Both Dr. Marie Söderberg and Dr. Lars Vargö pointed out that certain terms, such as “regional challenges”, remain undefined, which will have an impact on the viability of the SPA’s overall goal to tackle global issues together. With both parties still heavily reliant on the U.S., cooperation between the EU and Japan is yet to fully flourish. All in all, the panel unanimously concurred that the SPA, instead of being a panacea, will be a “base for starting out cooperation”.

The overall consensus among the participants was that the EU and Japan have an asymmetrical relationship, despite their pledge for shared values. This does temper expectations as to whether the new agreements will bring about viable change, yet optimism persisted. As Dr. Lars Vargö stated, only by promoting closer cooperation, and actively working towards that goal, will the EU and Japan be ready to “safeguard the liberal world order”.

ISDP would like to thank Ambassador H.E. Mr. Shigeyuki Hiroki, the panelists and members of the audience for participating in the discussion.

Watch the video of the event here or below.