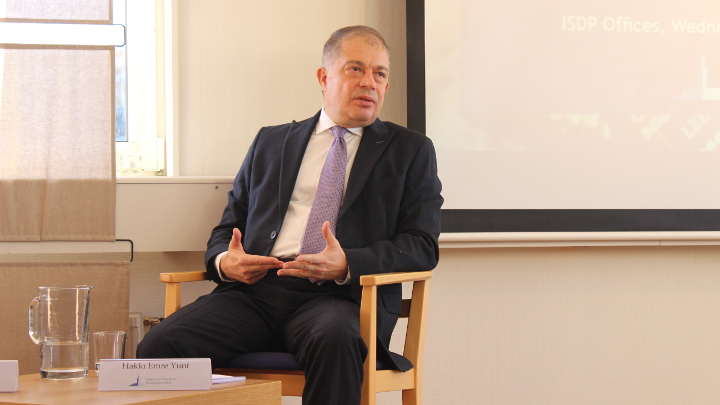 On October 24, 2018, ISDP welcomed H.E. Hakki Emre Yunt, Ambassador of Turkey to Sweden for a discussion of Turkey’s role in current global affairs. Located at the crossroads of Europe and Asia, Turkey’s strategic importance is an integral pivot point to the regional and international order.

Following a brief introduction of the forum’s moderator, Svante Cornell, Director of ISDP, Ambassador Yunt began by referring to EU membership as one of Turkey’s main strategic goals, despite the negative developments in the accession talks more recently. He expressed Turkey’s hope for an increased cooperation with the EU in areas of mutual importance, including funding for Syrian refugees in Turkey and post-Brexit prospects for the Customs Union deal. Being among the top eight contributors to NATO defense expenditure, Turkey has pledged to uphold its prominent role in regional crisis management and security.

At the regional level, Turkey’s foreign strategic choice focuses on establishing mechanisms of cooperation, facilitating diplomatic relations and peacemaking in its immediate neighborhood, as well as countering terrorist threats. Finally, Turkey seeks to diversify its global strategy through humanitarian diplomacy and bilateral partnerships in Africa, Latin America, and the Caribbean. Ambassador Yunt noted Turkey’s continued interest and cooperation with the Central Asian states, particularly in terms of the economic opportunities China’s Belt and Road Initiative holds in the region. The Ambassador’s presentation was followed by a Q&A session from the audience, covering Turkey’s comments on recent political developments.

Watch the video of the forum here or below.