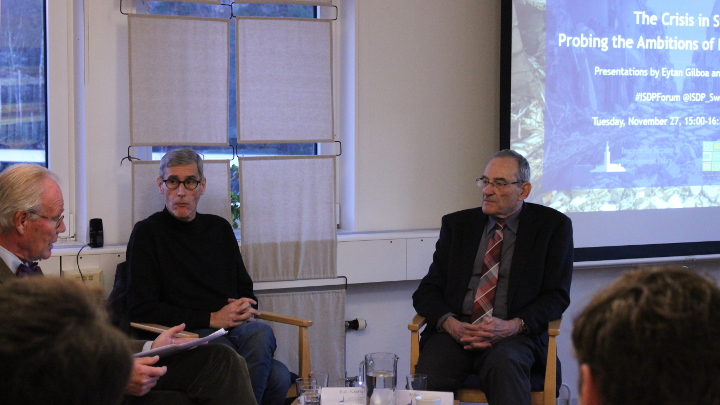 On November 27, 2018, ISDP and the Israel Public Diplomacy Forum (IPD Forum) hosted a joint forum on the crisis in Syria and the ambitions there of Iran and Turkey. The forum featured Prof Eytan Gilboa of Bar-Ilan University, and Mr Halil Karaveli, Senior Research Fellow at ISDP. Roger Svensson, Senior Fellow at ISDP, moderated the forum.

Prof Gilboa presented an Israeli perspective on the Syrian conflict and the role of Iran.  Prof Gilboa framed the Syrian conflict as “the mother of all proxy wars” additionally complicated by the Kurdish issue. After a short introduction, Prof Gilboa presented his main thesis: The war in Syria is a multidimensional proxy war with global, regional and local actors. A main driver of the conflict, he emphasized, is the dispute between Muslim Sunni and Shia states. Iran – a Shia state – would try to export its perceptions of Islamic rule and aim to replace governments of Sunni Arab states with regimes which are much more open for cooperation with Teheran.

According to Prof Gilboa, Iran’s final goal would be the domination of the Middle East. In order to achieve this hegemonic role, Iran would organize and lead a so called “Shia crescent” – a ribbon of Shia states expanding towards the West and aiming to defeat the Sunni Arab regimes. This Shia crescent – including sub-state terror groups which are allegedly financed by Teheran (e.g. the Hezbollah) – is considered as a major threat to Israel.

Furthermore, Gilboa mentioned the Iranian nuclear deal, stating that the Obama administration failed to succeed in negotiations with Iran. The assumptions underpinning the deal included that: 1) it would modify Teheran’s behavior in the region; 2) money connected to the deal would be utilized for domestic purposes; 3) Iran would not develop missiles which might be used to carry nuclear warheads. According to Prof Gilboa, all of these assumptions were wrong. Moreover, he said that the nuclear deal and Iran’s military interventions would threaten all Sunni states in the region. To counter this threat Prof Gilboa added that Sunni states have allied in a Sunni crescent.

Following Prof Gilboa’s presentation, Mr Halil Karaveli examined the conflict from the Turkish perspective. He started with an overview of Turkish interest in Syria, particularly in Afrin. Ankara’s ambitions in Syria go back to 1938, when the country was a French mandate. Mr Karaveli explained that Atatürk wanted to intimidate the French to hand over parts of Syria to Turkey. The reason for this was geopolitical: Atatürk knew that Turkey would be potentially prone to invasions from the Eastern Mediterranean and feared the integrity of the Anatolian heartland, unless it would have control over the then Syrian region of Hatay. According to Mr Karaveli, a similar reasoning has been revived today by Erdogan, effectively representing a Kemalist perspective on geopolitics. As Turkey did in 1939 when it annexed Hatay, Erdogan is today venturing into Syria with the aim to gain control of the Afrin region. The reason behind this is to reduce or even banish the Kurdish militia’s control over the Syria’s northern regions bordering Turkey.

To explain the current situation in Syria from Ankara’s perspective, Mr Karaveli described Turkey’s intervention in the country starting in 2011-12. Together with Washington, Erdogan prepared the transition of power in the Syrian to so called “moderates”. However, these “moderates”, according to Mr Karaveli, were in fact Islamists, and Turkey was aware of this, hoping that supporting them would elevate the Muslim Brotherhood to power. This ambition comes from Erdogan’s strive to establish a “new Ottoman empire”, and of taking the lead role in ruling the region’s Sunni Arabs. Mr Karaveli added that Turkey has framed the US as a supporter of terrorist groups, since Washington decided to create its military posts in regions which are under Kurdish control, which according to Ankara legitimizes the Kurds.

Wrapping up by touching on Prof Gilboa’s “Sunni Crescent”, Mr Karaveli arguing that the Crescent contains an ideological rift due to the diverging perceptions of Turkey and Saudi Arabia on the Muslim Brotherhood.

The forum concluded with a Q&A focused on the role of religion, Russia, the US, and comparisons with the conflict in Afghanistan.

ISDP would like to extend its thanks to IPD Forum for making this forum possible.

Watch the video of the forum below, or here.