Summary of the ISDP Forum “Is Shinto Politics? The Influence of Shinto in Today’s Japan” 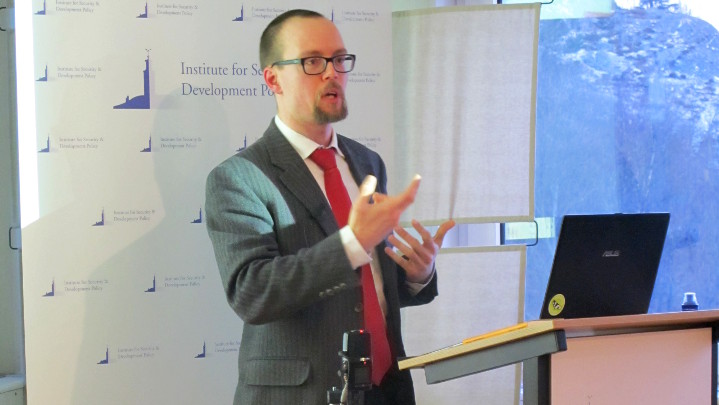 On February 8, 2017, the Institute for Security and Development Policy welcomed Ernils Larsson, Ph.D. candidate in the History of Religions at Uppsala University, for a presentation on the role of Shinto in Japanese politics.

The event was moderated by Ambassador Lars Vargö, Distinguished Fellow at ISDP, who opened by introducing the Shinto religion as something that on the one hand is always there in Japanese society; something that everyone in Japan belongs to, and on the other hand, as something that is seen as related to nationalistic politics.

Mr. Larsson opened his presentation with a picture of world leaders at the 2016 G7 summit in Ise-Shima. Why was Ise, known for its important Shinto shrine, chosen for the summit? Practical reasons, but also more emotional and political ones, guided its candidacy as a host location, argued Mr. Larsson. Ise is a center for what he described as the political “Shinto right”, and Prime Minister Shinzo Abe, himself a prominent conservative and nationalist, was very happy with the selection of Ise-Shima.

Mr. Larsson continued by explaining that before the Second World War, Shinto was state ideology in Japan, and in today’s Japan there is a movement that has as its abstract goal to reestablish Japan as a nominally Shinto nation. Prominent groups in this movement include the Japan Conference (Nippon kaigi), Association of Shinto Shrines (Jinja honcho), and the Shinto Association for Spiritual Leadership (Shinto seiji renmei). This movement, he argued, has a large lobbying influence on Japanese politics, counts a majority of Diet members as sympathizers, and has strong ties to the ruling Liberal Democratic Party. Important issues for the Shinto right movement include constitutional reform, primarily that of article 20 which separates religion from the state. Mr. Larsson said that the Shinto right, having mobilized its resources in the wake of a court ruling in 1997 that designates Shinto a religion (and thus, a no-go area for official state functions), wants a reformed article 20 which explicitly excludes “customary practices” from constitutional limits on the relationship between religion and the state.

The seminar was concluded with a Q&A session, during which Mr. Larsson answered such questions as where the movement’s support comes from, how the Shinto right sees the Emperor’s own opinion on the issues they push, and how much support the movement has in Japanese academia. In answering these questions, Mr. Larsson made the point that the movement is a very elitist such with little broad support among ordinary people, and that as visibility of it increases, greater criticism of its goals is likely to emerge.