Summary and Video of the ISDP Forum Russian Hybrid Tactics – Past, Present, and Future 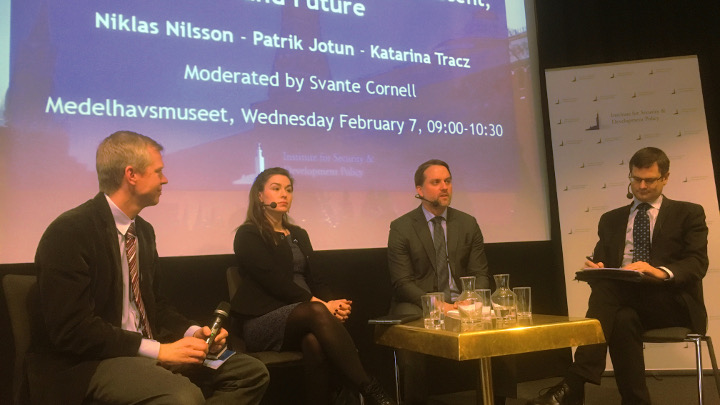 Hybrid warfare tactics are rapidly dismantling prior perceptions of foreign interference and acts of aggression. Nuanced methods of cyber-attacks, disinformation and targeted investments in foreign elections are reshaping the way we think about geo-political security. In light of this, on February 07 2018, ISDP hosted a forum at the Medelhavsmuseet in Stockholm on the topic of Russian hybrid tactics. The event was paralleled with the release of a new ISDP Silk Road paper, Russian Hybrid Tactics in Georgia, written by Dr. Niklas Nilsson.

Dr. Nilsson, Assistant Professor at the Swedish Defense University and Research Fellow as well as Associate Editor of the Central Asia-Caucasus Analyst at ISDP, was joined by Patrik Jotun, Director of the Swedish Center for Russian Studies and Katarina Tracz, Director of the Stockholm Free World Forum and Marshall Memorial Fellow at the German Marshall Fund of the United States for the panel discussion. The forum was moderated by Dr. Svante Cornell, Director of ISDP.

Introducing the topic, Dr. Cornell remarked that, for 25 years, Russia had developed a wide range of hybrid tactics designed to intervene in the West and neighboring areas such as Abkhazia, South Ossetia, the Crimea and Transnistria with the intent to foment instability and doubt within nations. Georgia, however, has been and still remains one of the most notable places affected by these hybrid, « non-linear » tactics.

Dr. Nilsson began by giving the audience some insight on the different points of pressure used by Russia. They ranged from the exploitation of economic and energy dependence to using tactics of disinformation and government interference. He then noted the strong interrelation between all those points, emphasizing the need to analyze them as an integrated whole. Ms. Tracz further pointed out that the multidimensional character of these hybrid tactics allowed Russia to compensate for its weakened military prowess. For some time, the Kremlin has used methods of economic coercion and media manipulation in order to achieve its agenda of reinstating its influence on the global stage.

Mr. Jotun explained that the main objective of these hybrid tactics is to incite doubt in the socio-political frameworks of the West and bring division. Through exploiting existing vulnerabilities in Western societies, Russian hybrid tactics create internal tensions and doubt, thus weakening targeted countries.

The panelists highlighted how it is the adaptive quality of Russian hybrid tactics that make them so effective. Mr. Jotun explained that while its general narrative describes Western countries as « materialistic immoral failed states », Russia has tailor-made tactics for each country and it is not uncommon to see competing sub-narratives for different parts of the population. Commenting on the case of Sweden, he asserted that most of the Russian narrative mirrors the rhetoric of nationalist and populist parties which fuels concerns about Islamic immigration and the overly-liberal political establishment.

The forum ended with an open Q&A session which covered the following topics:

Watch the video of the forum here, or below.