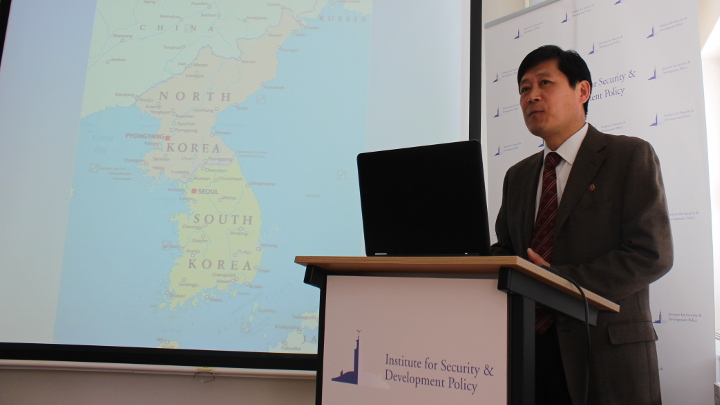 On March 27, 2018, ISDP hosted a forum on Inter-Korean relations after the Pyeongchang Olympics. The forum featured presentations by Jon Min Dok, Director at the Institute for Disarmament and Peace (IDP), Pyongyang, and Park Hyeong Jung, Senior Research Fellow at the Korea Institute for National Unification (KINU), Seoul. Both were Visiting Fellows at ISDP in March 2018.

In his talk Director Jon of IDP expressed sadness over the division of the Korean Peninsula, saying that the homogenous nature of Korea, and the current momentum in Inter-Korean dialogue, show that Korea is nothing but one nation. The Director was optimistic on the potential for reunification, and argued that the international community should encourage Inter-Korean dialogue while not interfering. After the talk, Director Jon was joined on stage by Mr Sin Hyok, Researcher from IDP and also a Visiting Fellow at ISDP, for a Q&A session with questions on the timing of reunification, what to expect from upcoming summits, and the meaning of the denuclearization that the DPRK has talked about.

In the second presentation of the forum, Dr Park of KINU gave a personal estimation of the main drivers of conflict and thaw on the Korean Peninsula. He discussed the differing positions on the conflict – optimism in the ROK, pessimism and “maximum pressure” in the United States, probing of adversaries in the DPRK – and how they could be reconciled. After his presentation, Dr Park took questions related to the six-party talks, the efficacy of Donald Trump’s hardline strategy, and the importance of the Olympics.