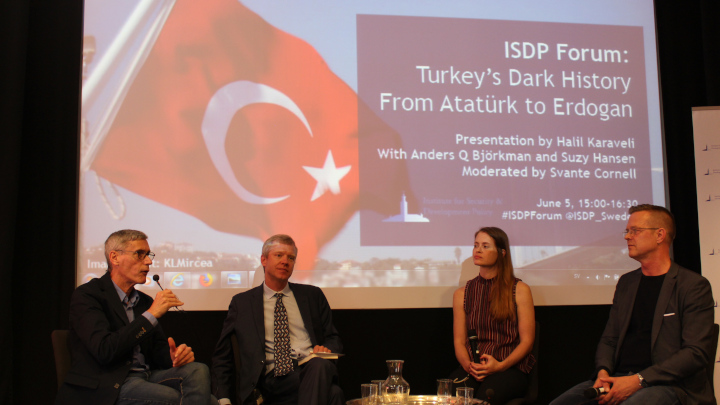 On June 05, 2019, ISDP hosted a public forum entitled; “Turkey’s Dark History – from Atatürk to Erdogan”. The forum commenced with a presentation from Mr. Halil Karaveli, Editor of the ISDP Silk Road Studies Program’s Turkey Analyst and a researcher at ISDP. The presentation coincided with the launch of Mr. Karaveli’s latest book entitled “Why Turkey is Authoritarian: From Ataturk to Erdogan” which seeks to address the history of authoritarianism that has existed in Turkey since its inception.

In his presentation Mr. Karaveli highlighted the misconception that military coups allowed for the rise of democratic secularism in the early 20th Century. In contrast, secularism and religious leadership are “merely two variants of the same right-wing government” that share the common objective to destroy the left-wing. Additionally, Karaveli argued that Turkish authoritarian behavior predates the current wave in right-wing populism being experienced around the world, with its origins rooted in the political violence of late 1970s. As a result, Karaveli assessed that the “seeds of the 2016 coup were sewn decades ago” during the right-wing paramilitary crackdown against left-wing supporters that left over 5,000 dead.

However, he was also critical of the left in abetting authoritarianism at points coupled with poor communication choices leading to negative media coverage. These factors create a Turkish state that, in the eyes of Karaveli, has been bred to harbor and proliferate authoritarianism through half a century of dark political motives.

Following Mr. Karaveli’s presentation, a panel session added journalists Anders Björkman and Suzy Hansen to the discussion, which was moderated by ISDP Director Svante Cornell. During the panel talk, Ms. Hansen recalled the positive reception given to Erdogan following his election in 2007, when at the time he was considered very pro-business and appealed to liberal thinkers. For Hansen, instead of being aware of the changes Erdogan began to make, she believes too many journalists fixated on the “secular vs Islamic dynamic”, and largely ignored the AKP until the alterations to the Turkish system became glaring. Björkman added that the intellectual left in Turkey did themselves no favors by alienating much of the lower-class from dialogue, essentially pushing them into the arms of the right-wing government.

Several questions were posed by the audience regarding the future of Turkey; post-Erdogan, to which the panelists responded optimistically. Ms. Hansen remained “hopeful for a post-AKP Turkey as quite literally anything is possible in the current climate”. Similarly, Mr. Karaveli sees potential solutions to the current state of affairs and states the need to “form a progressive front” to counter the ruling nationalists in unified force. Karaveli concluded by commenting on the significant geopolitical importance of Turkey. Whether the nation will continue on its path of authoritarianism, or if we will witness a notable shift to democratic governance, the repercussions will be felt far beyond Anatolian borders.

ISDP would like to thank Mr. Halil Karaveli, Mr. Anders Björkman and Ms. Suzy Hansen as well as members of the audience for their participation in the discussion.