The United Nations Command and the Role of Japan 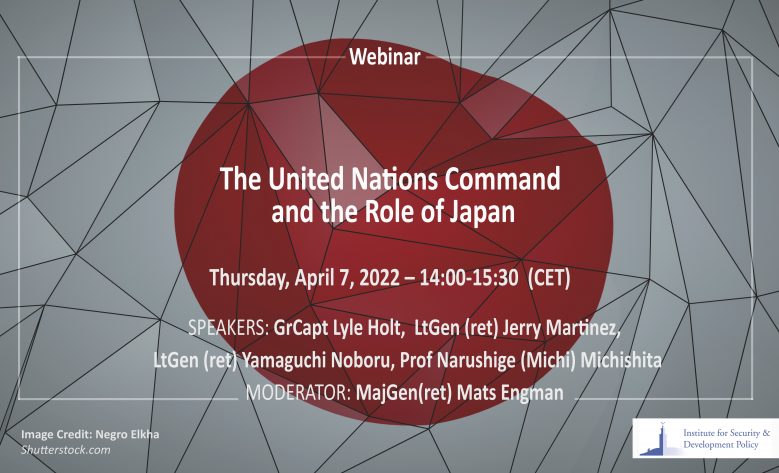 From a strategic and military aspect Japan would play an important role in case of a renewal of serious military action on the Korean peninsula. Not only because of its geographic location but also because of Japan’s military capabilities and the strong U.S. military presence in Japan. What is maybe less known is the importance of the United Nations Command (UNC) and its Rear Headquarters (HQ), located at Yokota Airbase in Japan. It was at Yokota Air Base Gen MacArthur set up the very first UNC HQ in 1950. After the Korean War, several of the UN Sending States (states providing military forces to the Korean War) and Japan signed a Status of Forces Agreement (SOFA), and the UNC main Headquarters moved to Seoul while maintaining the UNC Rear HQ in Yokota. Through this SOFA the U.S. and Japan mutually designated 7 bases for use by those UN Sending States who are signatories to the SOFA. Additional nations can join upon approval of the Japanese Government.

In case of a contingency on the Korean peninsula, possible military reinforcements, and evacuation of civilians from South Korea would need to use Japanese territory and bases for transit and as a staging area. Such reinforcement would be coordinated by the UNC based in South Korea and instrumental in this would be the UNC Rear HQ, still located at Yokota Air Base in Japan.

The Government of Japan has over the years re-confirmed its commitment to the rather unique role given to UNC, UNC Rear and the Sending States, allowing them access to these 7 bases to be used in a possible contingency. “Operational control” to allow Sending States military units access to these 7 bases have on a regular basis been delegated to UNC and UNC Rear, by successive Japanese Governments and the Commander of the UNC.

In continuation with the previous webinar on “The Current and Future Role of the United Nations Command in South Korea”, ISDP’s Korea Center is honored to organize this second webinar to explore this rather unique construct and to discuss political, strategic and military implication for Japan, the United States and the Korean Peninsula in general. We have invited four experts and they will discuss the current situation as well as how Japan would react in a real crisis and the importance of this arrangement to any contingency related to the Korean Peninsula.

The webinar will be moderated by MajGen(ret) Mats Engman, ISDP.