The EU and Iran Sanctions: What Way Forward? 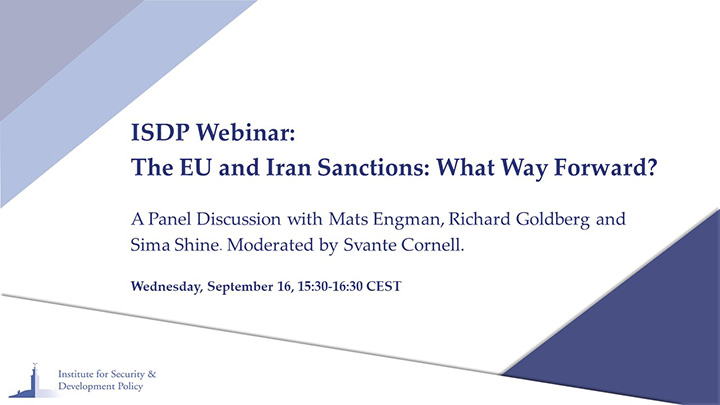 On October 18, the UN ban on conventional arms sales to Iran will expire. After the Trump Administration sought to trigger a “snapback” of sanctions on Iran, the EU faces the thorny issue of how to deal with this problem. Meanwhile, Iran is in material breach of several commitments it made under the JCPOA, has worked aggressively to expand its sphere of influence in the Middle East, and orchestrated assassinations of dissidents in Europe. What would be the implications of letting the ban expire? And what solutions are there for the EU?

In this ISDP Webinar, Mats Engman, Richard Goldberg, and Sima Shine will discuss the implications of the expiration of this ban, and answer the audience’s questions in a Q&A session. Major General (ret.) Mats Engman is a Distinguished Military Fellow at ISDP, Richard Goldberg is a senior advisor at the Foundation for Defense of Democracies (FDD), and Sima Shine is head of the Iran program at the Institute for National Security Studies (INSS). The event will be moderated by Svante Cornell, Director and co-founder of ISDP.