Sino-Russian Cooperation: The Impact on the Greater Nordic Region and the U.S. 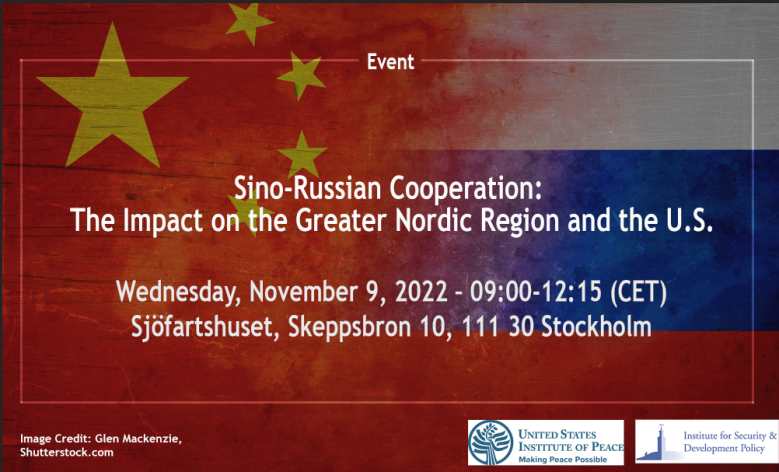 Welcome to this jointly organized event with the United States Institute of Peace (USIP):

The relationship between Russia and China has been increasingly concerning from both American and European perspectives. This is not least true in the Greater Nordic region (GNR), the Nordic and Baltic states, but the impact as well as countermeasures has been relatively understudied. China and Russia have increased their aggressive posturing in the GNR region with military cooperation, political coordination, and the tension between the GNR region and Russia, but also increasingly with China, has increased significantly with economic and political repercussions for all states. The reactions and interpretations of the situation has been very different from and within the different states and a more coordinated response is much needed. Finland and Sweden are attempting to join NATO, Lithuania, Latvia, and Estonia have left the 16+1 format, and economic sanctions are rampant against both states and individuals.

We invite the public to two panels at the jointly organized event with the United States Institute of Peace (USIP). The first panel with Dr. Andrew Scobell, USIP, and Mats Engman, ISDP, will focus on the topic of the great power competition. Dr. Inna Šteinbuka, Director of the Master’s degree program “European Studies”, and Dr. Konstantinas Andrijauskas, Associate professor at the Institute of International Relations and Political Science, will discuss the question “Where is the Greater Nordic region in this?”.