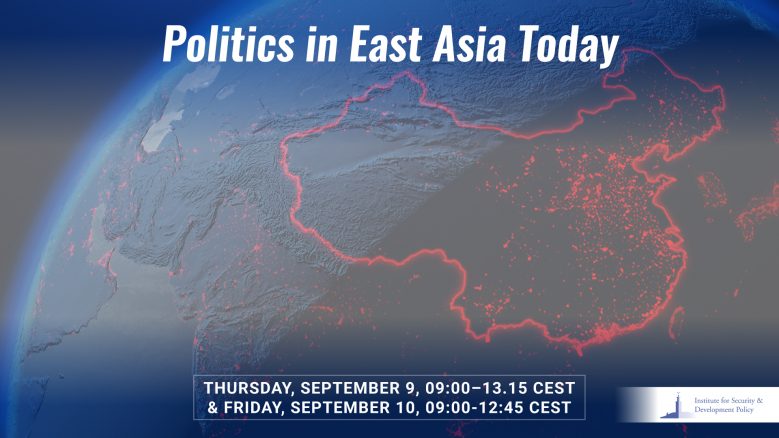 The ISDP Stockholm China Center will host a two-day seminar on ‘Politics in East Asia Today’, bringing together European and East Asian scholars and experts who are distinguished figures in their respective fields. To better understand conflicting political, economic, and diplomatic realities, ISDP hopes that this will provide a platform for valuable discussion and exchange.

Prof. Joseph Cheng Yu-Shek 鄭宇碩 is a retired professor of Political Science and Coordinator of the Contemporary China Research Project at City University of Hong Kong. As an independent researcher and writer since 2015, he publishes widely on the political developments in China and Hong Kong, Chinese foreign policy, and developments in southern China. His latest books include Political Developments in Hong Kong (2020) and Evaluation of the C.Y. Leung Administration (2020). He served as the Alliance for True Democracy convener in Hong Kong, was the rector of the New School for Democracy, and is a trustee of the Justice Defence Fund in Hong Kong.

Yan-ho Lai 黎恩灝 is the Hong Kong law Fellow at the Center for Asian Law at Georgetown University Law Center and a Ph.D. Candidate in Law at SOAS, University of London. His research focuses on legal resistance, legal transplant, and legal professionalism in authoritarian regimes and the relationship between the rule of law and social movements in Hong Kong. He is the author of Unravelling Authoritarian Rule of Law in Hong Kong: From Post-Umbrella Resistance to the Anti-Extradition Bill Protests (2021).

Dr. Willy Lam 林和立 is an Adjunct Professor at the Department of History at the Chinese University of Hong Kong. He is a prominent Hong Kong journalist, having previously worked for the South China Morning Post, a frequent political commentator, and a Senior Fellow at the Jamestown Foundation. He is the author of Chinese Politics in the Era of Xi Jinping (2015) and The Fight for China’s Future (2020).

Prof. Dr. Lutgard Lams is a Professor of Discourse Analysis at the Faculty of Arts, KU Leuven Campus Brussels, Belgium. Her research focuses on critical discourse analysis of totalitarian/authoritarian discourses, leadership discourses in China and Taiwan, nationalism and identity politics, and cross-strait relations as presented/framed in Chinese/Taiwanese official and media discourses.

Dr. Roger Lee Huang is a lecturer in terrorism studies and political violence at Macquire University in Australia. His research interests include politics, international relations, and security in East and Southeast Asia. He previously worked at Lingan University in Hong Kong, Academia Sinica, and with the Democratic Progressive Party in Taiwan. He is the author of The Paradox of Myanmar’s Regime Change (2020).

Dr. Yeau-Tarn Lee 李酉潭 is a professor at the Graduate Institute of Development Studies at National Chengchi University in Taiwan. He is the editor-in-chief for the Hanlin Edition of the Tanwa Citizens and Social Sciences textbook. His research focuses on political thought, democratic theory, democratization, liberalism, and human rights. He is the author of Freedom, Human Rights and Democratic Peace: The Core values of Democracy in Taiwan and Transition in a Party-State System: Taiwan as a Model for China’s Future Democratization.

Dr. Börje Ljunggren served as the Swedish ambassador to China (2002-2006) and Vietnam (1994-1997) and was the head of the Asia Department of the Swedish Ministry for Foreign Affairs. He also served as Department Head at the Swedish International Development Agency (SIDA). Currently, he is an Associate of the Asia Center at Harvard University, a Senior Associate Fellow at the Swedish Institute of International Affairs, and a board member of the Stockholm China Economic Research Institute at the Stockholm School of Economics.

Prof. Torbjörn Lodén 罗多弼 is the head of the Stockholm China center at the ISDP. He previously served as a Professor of Chinese at Stockholm University. From 1973 to 1976 he was the Cultural Attaché at the Swedish Embassy in Beijing and was a research fellow at City University in Hong Kong from 2003 to 2004. He is a member of the Royal Swedish Academy of Letters, History and Antiquities. His main research interest covers Chinese intellectual history, and he has published several books on both pre-modern and modern Chinese culture.

Dr. Fengming Lu 陆风鸣 is a lecturer at the Department of Political and Social Change at the Australian National University. His research interests include authoritarian politics, Chinese elite politics, information and propaganda as well as China’s political economy. His works have been published in Political Communication and Economics of Education Review.

Larissa Stünkel is a Junior Research Fellow at ISDP’s Stockholm China Center. She holds a master’s degree in Asian Studies from Lund University, Sweden, and a bachelor’s degree in International Studies from Leiden University, the Netherlands. Her research interest covers Taiwan-China relations in the Pacific Islands, maritime security, and East Asian security and geopolitics. She previously published in Foreign Policy and The Diplomat.

Wen-Hsuan Tsai 蔡文軒 is a research fellow at the Institute of Political Science at Academia Sinica in Taiwan. His main research interests include political institutions, the development of the Chinese Communist Party, comparative politics, and the comparative study of authoritarian regimes. His works have been published in China Quarterly, Journal of Contemporary China, Asian Survey, Journal of East Asian Studies, and China: An International Journal.