Nathan Law: Journey to Freedom – My Life that Rhythms the Fall of Hong Kong 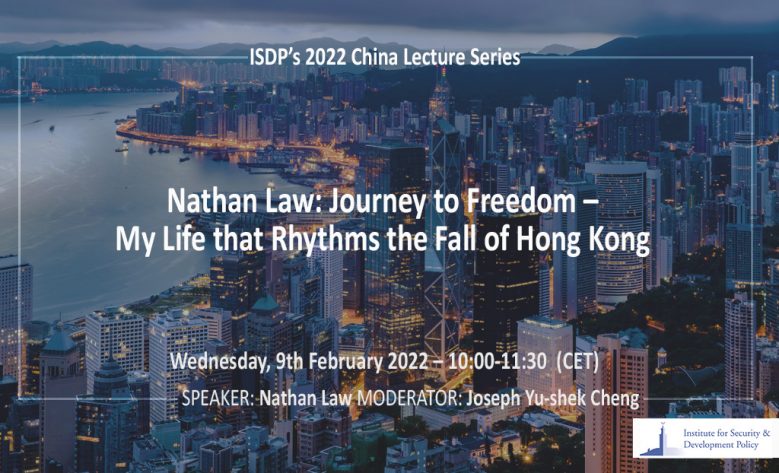 Did you miss this webinar? A recording is available on ISDP’s YouTube channel.

In this webinar, Nathan Law intends to present the recent history of the democratic movement in Hong Kong through his own lens. He has been a prominent protest leader and was the youngest elected legislator in Hong Kong, yet ended up living in exile in the UK. The political suppressions he has encountered reflect the erosion of freedom in Hong Kong in the past few years. From his story, we understand how the government’s authoritarian toolboxes expanded and what made Hong Kong unfree.

More about the speaker:

Nathan Law is a young Hong Kong activist, currently in exile and based in London. During the Umbrella Movement in 2014, Nathan was one of the five representatives who took part in the dialogue with the government, debating political reform. Upholding non-violent civic actions, Nathan, Joshua Wong and other student leaders founded Demosistō in 2016 and ran for the Legislative Council election. Nathan was elected with 50,818 votes in the Hong Kong Island constituency and became the youngest Legislative Councilor in history. Yet his seat was overturned in July 2017 following Beijing’s constitutional reinterpretation, despite international criticism. Nathan was later jailed for his participation in the Umbrella Movement. The persecution sparked global concern over Beijing’s crackdown on human rights and democratic movement in Hong Kong.In 2018, Nathan and his fellow student activists Joshua Wong and Alex Chow are nominated for the Nobel Peace Prize by US congressmen and British parliament members. Due to the risk imposed by the draconian National Security Law, Nathan left Hong Kong and continues to speak up for Hong Kong people on the international level. In 2020, he was listed as one of the 100 most influential people in the world by TIME.