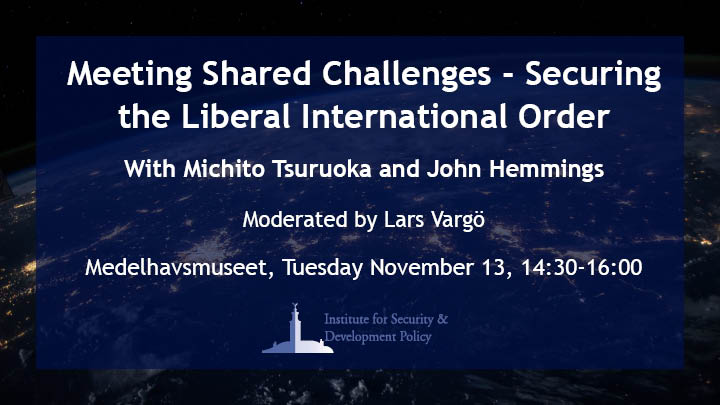 Protectionism fueled by populism, aggressive investment strategies, erosion of multilateral initiatives – the liberal international order from which the world, including Europe and Asia can benefit, is under threat from several directions. Securing this order as well as free and open trade and investments from challenges by revisionist powers requires a response grounded in the rule of law, not only to advance economic growth but also for national security purposes. Inviting experts from countries with strong commitments to the rules-based order, Japan and the UK, this ISDP forum will spotlight political and security dynamics playing a role in the maintenance of the liberal international order.

The forum will see Dr Michito Tsuruoka of Keio University and Dr John Hemmings of the Henry Jackson Society give talks on ways to counter the aforementioned challenges. After the presentations there will be time for discussion and Q&A. The forum will be moderated by Dr Lars Vargö of ISDP.

Michito Tsuruoka is Associate Professor at the Faculty of Policy Management, Keio University. He received his Ph.D. in War Studies from King’s College, London. His research interests include European foreign policy, defence diplomacy and Europe-Japan/Asia relations. Previously he served at the National Institute for Defense Studies (NIDS), Ministry of Defense, Japan (2009-2017), and he was a Special Advisor on NATO at the Japanese Embassy in Belgium (2005-2008).

John Hemmings is Director of the Asia Studies Center at the Henry Jackson Society and an Adjunct Fellow at the Center for Strategic and International Studies. He holds a Ph.D. in International Relations from the London School of Economics and Political Science. In 2013 and 2015, he was the UK Secretariat for the UK-Japan 21st Century Group, and he was previously a Visiting Fellow at Pacific Forum CSIS and a Research Analyst at the Royal United Services Institute.

Lars Vargö is Distinguished Fellow at ISDP and former Swedish Ambassador to Japan (2011-2014) and South Korea (2006-2011). He holds a Ph.D. in Japanese Studies from Stockholm University.