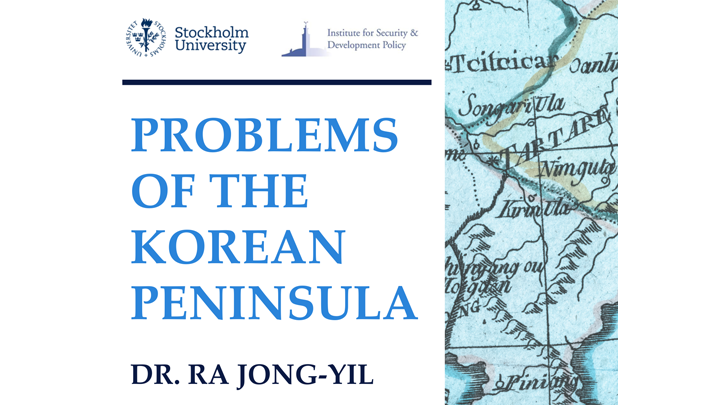 On September 26, 2022, ISDP, in collaboration with Stockholm University, will hold a public lecture with Dr. Ra Jong-yil, “Problems of the Korean Peninsula”. The lecture will take place at the university’s Department of Asian and Middle Eastern Studies.

After a short introduction by Dr. Sangsoo Lee, Head of ISDP’s Korea Center, Dr. Ra Jong-Yil will present the main issues that are plaguing Korea today. Starting from their shared past, from the Japanese occupation to the Korean War until today, Dr. Ra will present the story and unique reality that is the yet-ongoing Korean conflict.

In his discussion about the vagaries of both sides of the Peninsula, Dr. Ra will delve into the pain brought by the separation, the aspiration for unification throughout the second half of the last century, and the failures. Dr. Ra will briefly compare the separation of Germany, with the Korean one and then move on to present the pragmatic aspects related to unification, ranging from political, economic, and military power to international political standing and soft power. Lastly, Dr. Ra will elucidate the heterogeneities that have developed between the two Koreas since their division, the progress and rapid modernization that has characterized South Korea’s modern history, to the economic stagnation that has plagued the North.

Following his presentation, the floor will be opened up for a Q&A session.

15:10–16:30 Lecture – The Problems of the Korean Peninsula, moderated by Gabriel Jonsson

Ra Jong-Yil, Ph.D., is a Distinguished Professor at Gachon University and an author of multiple books on politics concerning North Korea. He previously served as South Korean ambassador to Japan and the UK, a director at the National Intelligence Service (NIS), and a Senior National Security Advisor to the Blue House.

He completed his BA and MA at Seoul National University before coming to Cambridge to complete a Ph.D. at Trinity College. Later he became a Professor at Kyung Hee University and a Fullbright Senior Fellow of USC.