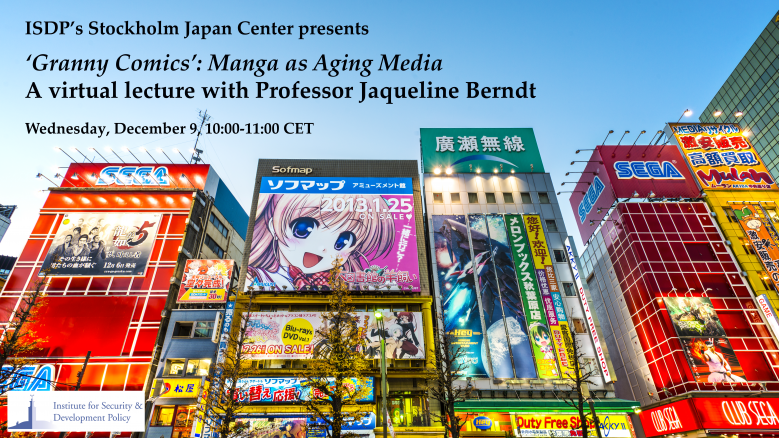 In popular as well as academic discourse, manga is perceived as being attached to youth culture. In practice, however, it has become an aging media, at least in Japan. This “aging” applies to its business model, technology, readership, and also story content. Focusing on the recently booming subgenre of senior-centered manga, or “granny comics”, Jaqueline Berndt will discuss how the inclusion of the elderly as both characters and readers relates to manga’s system of age and gender-oriented genres. This again provides a convenient opportunity to introduce the field of Manga Studies from a Japan-based point of view.

(The lecture rests on Jaqueline Berndt, “Manga Aging: Grannies and Gutters”, in Spaces Between – Gender, Diversity and Identity in Comics, ed. by Verónique Sina & Nina Eckhoff-Heindl, Wiesbaden: Springer VS, 2020, pp. 175–186.)

Jaqueline Berndt is a Professor in Japanese Language and Culture at Stockholm University. Through 1991–2016 she taught art sociology and popular visual media in Japan. Her scholarly work is primarily in the area of Comics/Manga Studies and Animation/Anime Studies and she engages in relating New Formalism to Media Studies. She has widely published in Japanese, English, and German. For more information see: https://www.su.se/english/profiles/jbern-1.259043.

This webinar will be moderated by the Head of ISDP’s Stockholm Japan Center, Lars Vargö.