Genres of Translation of Swedish Literature in Taiwan: the Past, the Present and Predictions 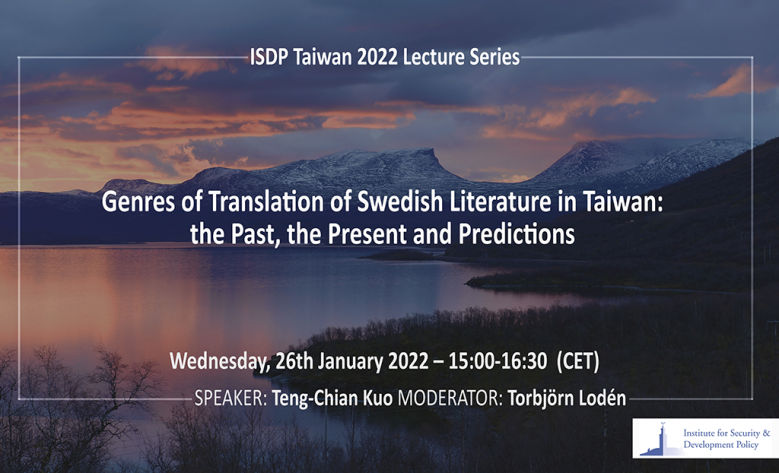 Did you miss this webinar? A recording is available on ISDP’s YouTube channel.

Translation has played a significant role in Taiwanese literature, while Sweden has been a prominent exporter of translated literature to other countries and languages. Translations of Swedish literature have therefore occupied a subtle but undeniable position in Taiwan’s literary production. However, literature is a living organism that gradually interacts with and is influenced by the societies involved. In the course of this interaction it develops new forms and reveals new trends and tendencies.

Using relevant statistics, related materials and clearly outlined perspectives, this lecture will give a brief overview of the main genres that have been translated into Chinese from Swedish literature (where the source language may be Swedish but not necessarily Swedish) in Taiwan so far. It will also make a first attempt to analyse which genres are likely to become more prominent in the foreseeable future.

Mr Teng-Chian Kuo was born and grew up in the city of Taichung in Taiwan. He studied English and literature at National Taiwan University, but also knows Swedish and holds an MA degree in translation from Stockholm University. He now resides in Sweden where he works both as an interpreter and a literary translator, mainly from Swedish but also from Norwegian and English into Chinese. He has translated works by Hans Rosling, Fredrik Backman, Jostein Gaarder and others.