ISDP Webinar: The Future of the EU-Japan Strategic Partnership Agreement 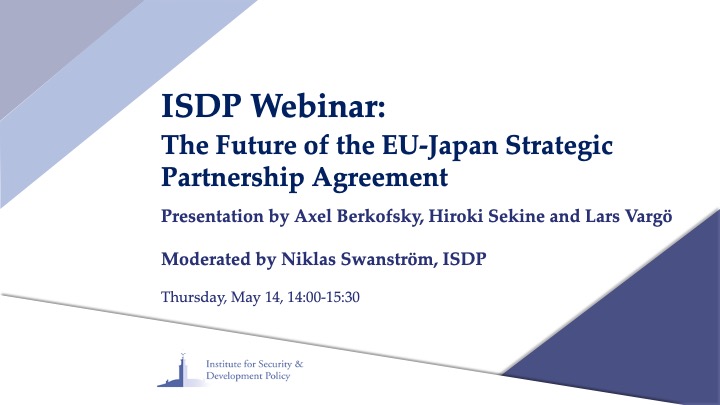 Information about the event

The EU-Japan Strategic Partnership Agreement (SPA) has been realized at a time when the United States, China, and Russia are in a process of competing for global attention and influence. Both the EU and Japan emphasize their shared values as an essential foundation for efficient cooperation, stressing freedom, democracy, human rights, and the rule of law. These are the very things powers like China and Russia often are accused of ignoring.

The discussion will revolve around relevant issues, such as: How efficient can the future EU-Japan cooperation be and what are the impediments for a full realization of the ambitious SPA? Following the presentations by the three speakers, the participants will be invited to ask questions in a Q&A session.

Information about the speakers

Dr. Lars Vargö is Head of the Japan Center at ISDP and former Swedish Ambassador to Japan and South Korea. Dr. Axel Berkofsky is Senior Lecturer at the University of Pavia in Italy and Senior Associate Research Fellow at the Milan-based Istituto per gli Studi di Politica Internazionale (ISPI). Mr. Hiroki Sekine is a concurrent Visiting Fellow at ISDP and Chatham House and was previously Senior Advisor to the Corporate Planning Department at the Japan Bank for International Cooperation (JBIC).