Chinese and European Resources for a Global Ethic 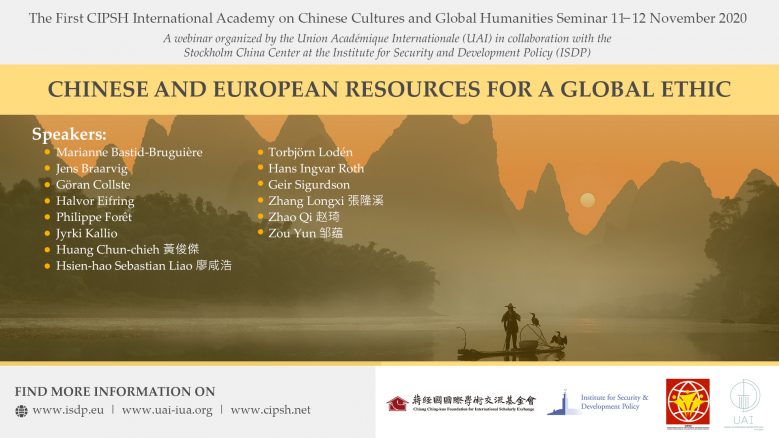 Like two big rivers the cultural traditions of China and Europe flow through the historical landscape. They have collected their waters from different sources and have themselves given rise to innumerable tributaries, linking up with other cultures and with each other. For more than two thousand years there have been contacts between them.

In many ways the cultural traditions of China and Europe are different, and there are also considerable differences within each respective tradition. Indeed, in comparing “China and Europe” or even “the East and the West” one often underestimates the internal diversity of the two while exaggerating the differences between them. No matter whether we speak about differences within one of the traditions or between them, the differences seem to be not so much about absolute dichotomies as variations on common themes. There is no unbridgeable gap that separates them.

The cultural traditions of China and Europe have to a considerable extent shaped the course of human history. Today they represent rich intellectual and ethical resources at our disposal for dealing with the problems and threats that are now facing mankind: climate change, the coronavirus pandemic, nuclear war, the unequal distribution of wealth, etc.

One challenge that emerges from this historical and global context is the urgency of improving cross-cultural understanding, and one important way of doing this is, in our opinion, to define a global ethic rooted in different cultural traditions, such as the Chinese and European traditions among others. Much has already been done in this regard. The Universal Declaration of Human Rights adopted by the United Nations in 1948 is one important example. The Global Ethic Project of Professor Hans Küng and his associates is another example. Yet still, much remains to be done to approach a definition of a global ethic, which is anchored in the Chinese, European, and other traditions and which can promote a sense of unity across borders and thus promote mutual understanding and decrease tensions. A Global Ethic has a fundamental role to play not only in defining basic values but also in reaching transcultural consensus about the meaning of key notions such as “well-being” and “good governance”. This is particularly timely at a moment when societies face a pandemic threat, which, in absence of short term delivery of technical solutions, has triggered a public debate on behavior patterns, how to balance dimensions like health and well-being, or individual concerns and collective interests, i.e., a debate on the choice of values and strategic options for the future.

9:00–9:15 Halvor Eifring: “What can global ethics learn from early Chinese philosophies of emotion?”

9:15–9:30 Zhao Qi: “Rethinking the Golden Rule: Through the Tradition of Thomism and Confucianism.”

9:30–9:45 Geir Sigurdson: ”Chinese and Western Philosophical and Ethical Perspectives:  Différance rather than Incommensurability.”

10:15–10:30 Jyrki Kallio: ”The Dialogue between Confucianism and its Translations: Output and Feedback.”

Marianne Bastid-Bruguière is emerita Director of Research at the Centre national de la recherche scientifique. She is a member of several learned societies, for example, Académie des Sciences Morales et Politiques. As a sinologist and historian, she has researched many different topics in the field of Chinese history. Ms. Bastid-Bruguière is most famous for her studies on education and educational reform during the late Qing dynasty and early Republican period.

Jens Braarvig is Professor of the History of Religion at the University of Oslo and a member of the Norwegian Academy, which he represents at the UAI. He is a specialist in Buddhism and a philologist studying several languages. Mr. Braavig is the main creator of the database Biblioteca Polyglotta.

Göran Collste is professor emeritus in Applied Ethics at Linköping University, Sweden. His research deals with problems in Ethics and Applied Ethics and his publications include books and articles on global justice, the principle of human dignity, work ethics, and ethical issues related to information and communication technologies (ICT Ethics).

Halvor Eifring (b. 1960) is a Professor of Chinese at the University of Oslo, where he teaches Chinese language, literature, and culture. His first book was on Norwegian drug slang, his second on modern Chinese syntax, and he has since worked on pre-modern Chinese literature, the cultural histories of meditation, and mind wandering in contemplative traditions. In his spare time, Mr. Eifring is one of the editors of the Norwegian cultural periodical Dyade and the general secretary of Acem International School of Meditation. He established Acem Taiwan and has taught meditation in several countries in Europe, Asia, and America.

Huang Chun-chieh is a Distinguished Chair Professor at National Taiwan University and a leading scholar in the field of classical Chinese thought, especially Confucianism. He is a member of the European Academy. Many of professor Huang’s books have been translated into English, French, German, Japanese, Korean, Vietnamese, Spanish, and Slovene.

Jyrki Kallio has a Ph.D. in Sinology and is a senior research fellow at the Finnish Institute of International Affairs. He is a specialist in China’s political culture, foreign policy, and Confucianism. Mr. Kallio has translated the Confucian Analects and Mencius into Finnish.

Samuel Lieu has a broad research interest in Ancient and Early Medieval History, especially in the study of the contacts between Ancient Civilizations across Central Asia. Currently Co-Director of the UNESCO-sponsored Corpus Fontium Manichaeorum, he began his teaching career at Warwick University in the UK in 1976 and was promoted to a full Professorship in 1994. He joined the Department at Macquarie in 1996 as Professor of Ancient History. His major research project today is on the history of Zayton (Quanzhou), a key port-city of the Maritime Silk Road at the time of Marco Polo. Fellow of the Australian Academy of the Humanities, he represents the Academy at the International Union of Academies and was elected as a Bureau Member of the IUA from 2013 till 2017. Retired in March 2016, he is still Adjunct Professor at Macquarie University. Mr. Lieu is a Visiting Fellow at Wolfson College, Cambridge, Trustee of the Ancient India & Iran Trust, and was elected President of the IUA in 2017.

Torbjörn Lodén is emeritus Professor of Chinese Language and Culture at Stockholm University and a member of the Royal Swedish Academy of Letters, History, and Antiquities, which he represents at the UAI. Professor Lodén is also Head of the China Center at the Institute for Security and Development Policy in Stockholm. In his research, he has mainly dealt with various aspects of China’s intellectual history.

Luiz Oosterbeek is a Professor of Archaeology at the Polytechnic Institute of Tomar and holder of the UNESCO chair in Humanities and Cultural Integrated Landscape Management. His research focuses on the transition to food-producing economies in Portugal, Africa, and Southern America. He also researches heritage and landscape management and is currently Secretary-General of the International Council for Philosophy and Human Sciences. Mr. Oosterbeek is the author of over 300 papers and 70 books, including “From Humankind towards Humanity, through epidemics and sociocultural cohesion” in Territori della Cultura 40, pp. 10-19, 2020.

Geir Sigurdson is a Professor of Chinese studies and philosophy; Head of Programme of Chinese studies at the School of Humanities, Faculty of Languages and Cultures, University of Iceland. He is also a Guest Professor at the Department of Philosophy, East China Normal University in Shanghai. Mr. Sigurdson is a specialist in classical Chinese philosophy.

Dr. Niklas Swanström is Director of the Institute for Security and Development Policy, and one of its co-founders. He is a Fellow at the Foreign Policy Institute of the Paul H. Nitze School of Advanced International Studies (SAIS) and a guest lecturer at the University of Pavia. His main areas of expertise are conflict prevention, conflict management, and regional cooperation; Chinese foreign policy and security in Northeast Asia; the Korean Peninsula, the Belt and Road Initiative, traditional and non-traditional security threats and its effect on regional and national security as well as negotiations. Dr. Swanström’s focus is mainly on Northeast Asia, Central Asia, and Southeast Asia. He has been a frequent traveler to North Korea since the early 1990s.

Zhao Qi is an associate professor at the philosophy Institute of Shanghai Academy of Social Sciences. She is a specialist in European medieval philosophy, ethics, and comparative study of eastern and western moral theories. Zhao Qi got her Ph.D. degree in religion from a joint program of Fudan University and Università Pontificia Salesiana in Italy, and she was a post-doc at Saint Louis University. Currently, she is a member of several learned academic societies in China.

Zou Yun is an assistant professor at the Philosophy Institute of Shanghai Academy of Social Sciences. She received a Ph.D. in Philosophy from Peking University. She is a specialist in classical Chinese philosophy, especially the philosophy of Zhuangzi. Zou Yun has published several articles in journals such as Monthly Review of Philosophy and Culture.