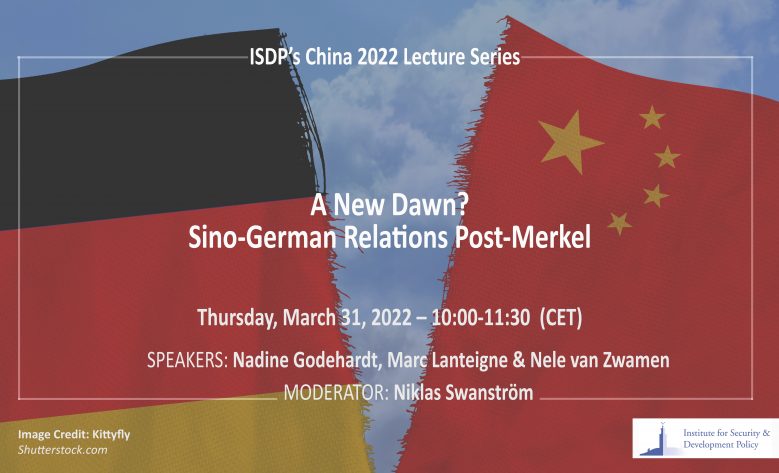 The relationship between China and Germany has for long been scrutinized, both domestically and internationally. While the Merkel government resisted calls for a tougher stance vis-à-vis Beijing, Berlin could find itself under greater pressure to rethink its China policy, not least since Russia’s invasion of Ukraine. Trade between Germany and China remains a major aspect of the global economy – yet there are signs that relations are fraying at the edges. With the Scholz government rethinking much of its foreign and security policy, advocating for a tougher stance on political suppression in Hong Kong and human rights abuses in Xinjiang, questions regarding the future trajectory of Sino-German relations arise.

We are honored to welcome Dr. Nadine Godehardt, Dr. Marc Lanteigne and Nele van Zwamen for a webinar on the present and future of Sino-German relations in the post-Merkel era.

Dr. Nadine Godehardt is a researcher at the German think tank SWP (Stiftung Wissenschaft und Politik), focussing on China, geopolitics and regional cooperation. She is the co-editor of the book series Routledge Studies on Challenges, Crises and Dissent in the World and is an affiliated researcher at ANCB The Aedes Metropolitan Laboratory in Berlin.

Dr. Marc Lanteigne is an Associate Professor of Political Science at UiT – The Arctic University in Norway, specializing in China, East Asia, and Polar Regional Politics and international relations. He previously taught in Canada, China, New Zealand and the U.K. and was an adjunct fellow with the research group “Asian Perspectives of the EU” at the Free University of Berlin in 2013.

Nele van Zwamen is the Desk Officer for China at the Konrad Adenauer Foundation’s Berlin office. She previously worked as a Research Assistant at the foundation’s Beijing Representative Office, gaining further on-the-ground experience in China following her studies.

Dr. Niklas Swanström, Director of the Institute for Security and Development Policy, will moderate the event.