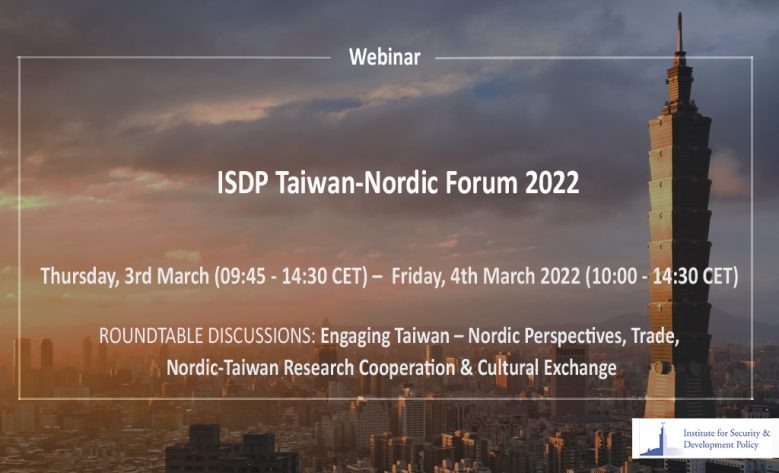 Did you miss the Taiwan-Nordic Forum 2022? The full recording is available on ISDP’s YouTube channel.

As part of ISDP’s Taiwan Studies Project, the Institute is hosting the Taiwan-Nordic Forum 2022. The forum will bring together Nordic and Taiwanese scholars and experts who are distinguished figures in their respective fields, in an effort to better understand conflicting political, economic, and diplomatic realities, ISDP hopes that this will provide a platform for valuable discussion and exchange.

The event is scheduled for March 3 & 4, 2022, and will be divided into four panels, each dealing with a key issue that will be of vital interest for both the Nordic countries and Taiwan in the foreseeable future.

The forum consists of the following public roundtable discussions:

Prof. Lodén has taken up the position as China Center Head with ISDP in September 2020. He previously served as a Professor of Chinese at Stockholm University.

Vincent Yao has taken up the position as Representative of the Taipei Mission in Sweden in July 2020. Prior to that he was the Director-General of the Department of North American Affairs at the Ministry of Foreign Affairs and has been stationed at the Taipei Economic and Cultural Office in Seattle.

Relations between the Nordic countries and Taiwan are usually portrayed against the backdrop of deteriorating relations with Beijing. Whilst geopolitically the question of Taiwan is challenging, the Nordics have maintained relatively stable informal relations with Taipei. The aim of this panel is to shed light on the durability of bilateral relations despite not granting formal diplomatic recognition. The panellists will explore what drives relations, how Nordic governments manage de facto relations, and potential future trends.

Julie Yu-Wen Chen is a professor of Chinese Studies at the faculty of Arts at the University of Helsinki, Finland. Chen is the academic liaison for the University of Helsinki at the Nordic NIAS Council based in Denmark as well as the Nordic Center at Fudan University, China. She is currently representing Finland in “COST ACTION: China in Europe Research Network” (European Cooperation in Science & Technology funded by the EU Horizon 2020 programme).

Olle Wästberg is the former Swedish Consul General in New York and served as the Director-General of the Swedish Institute. He holds a degree in political science and economic history from Stockholm University. In the late 1990s, he was a member of the Swedish Taiwan Friendship Organization during his time in parliament. Additionally, he was a member of the Swedish Democratic Committee and has travelled to Taiwan on numerous occasions, including as part of a journalistic delegation during his time as editor in chief of Expressen. In 2020, Wästberg published Den hotade Demokratin (Threatened Democracy).

Viking Bohman is an analyst with the Swedish National China Center. He holds a dual degree in International Affairs from the London School of Economics and Political Science (LSE) and Peking University. He previously worked for the Swedish Ministry of Foreign Affairs and the Swedish Embassy in Beijing. He is the author of a report on China’s coercive diplomacy in Lithuania and co-authored a brief on China’s propaganda efforts in Sweden.

As Covid-19 continues to impede on supply chains and geopolitical frictions persist, the last two years have proven relatively successful for Taiwan in strengthening its international trade network. Meanwhile, the Nordic countries have also sought to diversify their supply chains whilst putting emphasis on innovation and sustainability. This panel aims to explore current trade trajectories between the Nordic countries and Taiwan despite unofficial diplomatic relations.

Margareta Cederfelt is a Swedish politician and has been a member of the Swedish parliament for the Moderate Party since 1999. She concurrently serves as the president of the OSCE Parliamentary Association and has served as Acting Chair of the Ad Hoc Committee on Migration. Having led OSCE delegations to Tajikistan and Turkey, she has been an active advocate for democratic values, the rule of law, and peace and security in the OSCE region. In the Swedish parliament, she serves on the Committee on Foreign Affairs.

Håkan Jevrell is a Swedish ambassador and currently serving as the Swedish government’s
special envoy on Organized Crime. Between 2018 and 2020, he served as the Swedish
Representative to Taiwan and before that served as the ambassador to Singapore and
Brunei. Prior to his diplomatic career, Jevrell served as the State Secretary at the Swedish
Ministry of defence and held an advisory role at the Prime Minister’s Office. He holds an
LL.M. and a lieutenant’s commission in the Swedish Navy and served as a prosecutor
before his political career.

Johan Nylander is an award-winning author and free-lance Asia correspondent for Sweden’s leading daily newspaper Dagens Industri. His work is also published by CNN and Forbes, among others. He is the author of The Epic Split – Why ‘Made in China’ is going out of style which sheds light on the U.S.-China trade war. In addition to his writing career, he is a renowned public speaker and is the CEO of One Hour Asia.

Marc Lanteigne is an Associate Professor of Political Science at UiT – The Arctic University in Norway, specialising in China, East Asia, and Polar Regional Politics and international relations. He has previously taught in Canada, China, New Zealand and the U.K

Here you can find information about the second day of the event.